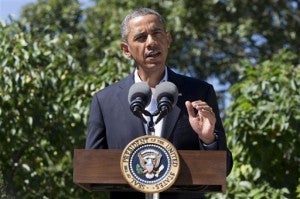 CHILMARK, Massachusetts — President Barack Obama has made his first public statement on the rapidly deteriorating situation in Egypt, saying the U.S. will cancel its joint military exercise because of the rising violence there.

He interrupted his weeklong vacation Thursday to address the fighting that has left more than 500 people dead.

The Bright Star military exercise has been a centerpiece of the countries’ military relations for decades.