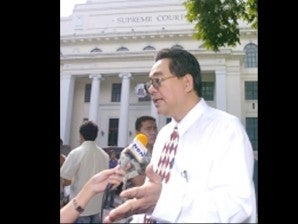 MANILA, Philippines—”How can she defend herself if she is in hiding?”

This was the question posed by Cagayan de Oro Representative Rufus Rodriguez after arresting officers failed to find Janet Lim-Napoles, the businesswoman tagged as the brains behind the alleged P10 billion pork barrel scam that spanned roughly a decade.

National Bureau of Information (NBI) agents were scouring the metropolis for Napoles and her brother Reynald Lim, after a Makati Regional Trial Court (RTC) issued an arrest warrant for the two over the alleged serious illegal detention of principal whistleblower Benhur Luy.

“Face the case and defend yourself. Flight means guilt–when you run away instead of answering the charges,” Rodriguez urged Napoles.

The Cagayan de Oro lawmaker earlier said that he had Commission on Audit (COA) documents which would show that his signature and those of beneficiaries of his project with the Technology and Livelihood Resource Center (TLRC) were forged by a bogus nongovernment organization.

“I was surprised when we received copies of the communications from COA in October and saw that my signature was faked,” he said.

Rodriguez said he was willing to cooperate in investigations on the alleged pork barrel racket.

Napoles lawyer on ‘missing’ client: Lacson did hide, too