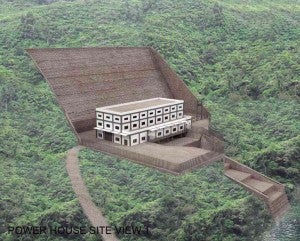 ARTIST’S illustration of a structure that will be used for the power house of the proposed hydroelectric power facility in Oriental Mindoro. CONTRIBUTED PHOTO

A P1.5-billion hydropower project has been launched in Mindoro Oriental by a green energy company that the company, in a statement, said would provide jobs for Mangyans in the province.

In its statement, the Ormin Power Inc. (OPI), subsidiary of Jolliville Holdings Corp. (JHC), said the project will tap the Inabasan River in the town of San Teodoro.

Benilio Camalig, a leader of the Mangyans in the area, was quoted by the statement as saying Mangyans near the project site expect the project to generate jobs for them.

The Department of Labor and Employment’s Institute for Labor Studies had encouraged businessmen to invest in renewable energy, which the institute said could generate up to 50,000 jobs in the next 20 years.

Jolly Ting, chair and chief executive officer of JHC, said in the statement that Mangyans will be given priority in jobs at the project, which includes work on the construction of roads leading to the hydropower facility.

The company building the plant, he said in the statement, “is mindful of the interest and welfare of the IP (indigenous peoples) community in Mindoro.”

“We cannot grow over what our natural environment can sustain. I am an advocate of sustainable growth,” Ting said in a speech during groundbreaking rites for the project last July 29.

“Our commitment is to make sure that we have sustainable energy, to make it affordable, to make it rightly-priced,” the statement quoted Petilla as saying during the groundbreaking rites.

OPI is one of the power providers of the Oriental Mindoro Electric Cooperative Inc. (Ormeco).

The plight of Mangyans in Occidental Mindoro has also caught the attention of the Aquino administration, leading to the distribution of ancestral domain titles to the indigenous groups covering at least 83,000 hectares.

Gov. Josephine Ramirez-Sato said the distribution of the titles is a commitment fulfilled by Mr. Aquino.

During his visit, the President also inaugurated a bridge and switched on a new electrification project for Occidental Mindoro. With a report by Madonna Virola, Inquirer Southern Luzon