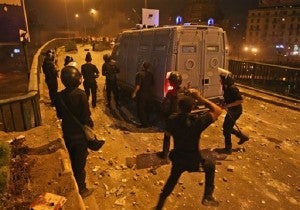 CAIRO – At least 15 people were killed on Wednesday as police moved in to disperse two huge protest camps set up in Cairo by supporters of Egypt’s ousted president Mohamed Morsi.

An AFP correspondent who counted the bodies at a makeshift morgue at the Rabaa al-Adawiya camp said many appeared to have died from gunshot wounds.

The Anti-Coup Alliance, an umbrella of pro-Morsi supporters, said in a statement that 25 were killed and dozens injured in the attack on the larger of the two protest camps in the eastern district of Nasr City.

There was no official word on casualties among the protesters in either camp, but state television said one policeman was killed.

The Interior Ministry however said that two security personnel were killed.

It warned in a statement that the forces would deal firmly with protesters acting “irresponsibly” and said it would guarantee safe passage to those who want to leave the sites.

Police fired tear gas at supporters of ousted president Morsi as security forces moved in on their sprawling protest camps in Cairo, an AFP correspondent and security official said.

Canisters of tear gas rained down on tents set up by the protesters at one end of the Rabaa al-Adawiya camp as police vehicles, one blaring a siren, advanced on the protesters.

“It is the beginning of the operation to disperse the protesters,” a security official told AFP, confirming that similar steps were being taken at the Nahda square camp.

An Associated Press television video journalist at the scene of the larger of the two camps said he could hear the screams of women as a cloud of white smoke hung over the site in the eastern Cairo suburb of Nasr City.

He said an army bulldozer was removing mounds of sand bags and brick walls built by the protesters as a defense line in the Nasr City camp. Army troops, however, were not taking part in the operation.

At the smaller protest site outside the Cairo University campus is Giza, armored carriers were securing the area on Wednesday.

The pan-Arab Al-Arabiya TV is showing images of clouds of smoke from the tear gas, collapsed tents and tires burning at the Nasser City protest site. The officials spoke on condition of anonymity because they were not authorized to talk to the media.

At least 250 people have died in clashes in Egypt following Morsi’s July 3 ouster in a military coup.