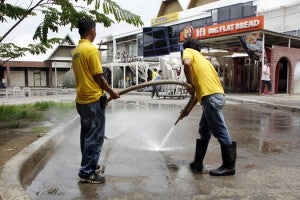 ZAMBOANGA CITY, Philippines – Military officials either do not know or would not want to talk about the Khalifah Islamic Movement (KIM), the group being blamed for the July 26 bombing in Cagayan de Oro City that killed eight people and wounded at least 40 others.

General Ricardo Rainier Cruz, commander of the Eastern Mindanao Command, said they still had to be briefed about the new group.

“Wala pa kaming alam tungkol dyan (We do not know much),” Cruz told the Philippine Daily Inquirer by phone.

Cruz said he only read about KIM in the newspapers.

“We have yet to be briefed about this,” he said.

“We need to trace this up so we will know who created this group,” he added.

Abu Misry Mama, spokesperson of the BIFF, said they still could not confirm the existence of the KIM.

“We are still confirming it. We still have no intelligence reports about this group,” Mama told the Inquirer by phone.

The Criminal Investigation and Detection Group (CIDG) has identified a certain Usman Hapids alias “Mam Man” as the KIM member who carried out the attack in Cagayan de Oro City.

Bautista, however, refused to talk to media.

General Rey Ardo, chief of the Western Mindanao Command, also declined to issue a statement, saying he was still busy with the visiting security officials.

Zamboanga City Mayor Maria Isabelle Climaco-Salazar said she and the other local government officials were briefed about KIM.

“They gave us the threat assessment of Mindanao, particularly Western Mindanao, and General Serapio briefed us about KIM that operates now in Mindanao,” the mayor said.

Climaco-Salazar said Gazmin explained to them that KIM is composed of “disgruntled groups that would want to be part of the negotiations.”

“But for one reason, they were left out and they are doing these actions, forming other cells and other groups,” she said.

The mayor, however, said Serapio claimed that the information about KIM “are subject for validation.”

“They gave their assessment but everything is still subject for verification,” she said.

Colonel Glen Macasero, commander of the 103rd Army Brigade Commander based in Marawi City, said they were just simply briefed about the KIM and its relationship with other threat groups in Mindanao.

“It’s more of a presentation about the KIM and its relationship with the ASG (Abu Sayyaf Group), BIFF, SOG (Special Operations Group), JI (Jemaah Islamiya), but everything presented is for validation together with the PNP and AFP,” Macasero said.