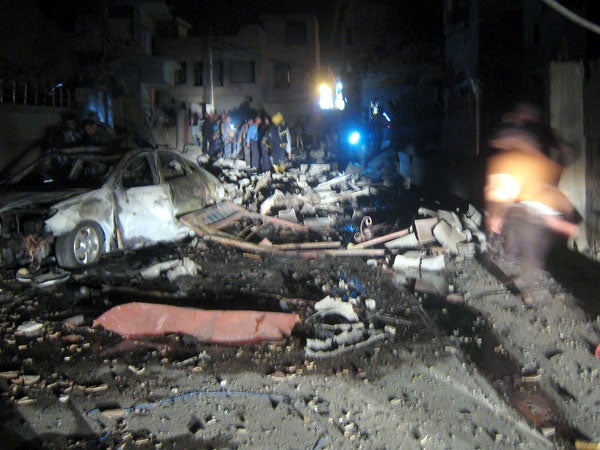 Security forces and civilians inspect the scene of a car bomb attack near a mosque in Kirkuk, 290 kilometers (180 miles) north of Baghdad, Iraq, Saturday, Aug. 10, 2013. A wave of car bombings targeting those celebrating the end of Ramadan across Iraq, killing and wounding scores of people, officials said, a bloody reminder of the inability of Iraqi authorities to stop violence threatening to spiral out of control. AP

The attacks are the latest in a surge in violence that security forces have failed to curb, despite carrying out major operations against militants said to have resulted in scores of arrests, including 82 on Monday.

In the deadliest attack on Tuesday, a car bomb exploded in the northern province of Kirkuk, killing three police.

Bombings also killed a soldier, a Sahwa anti-Al-Qaeda fighter and two civilians in Salaheddin province, north of the capital, while gunmen shot dead a former soldier and a civilian in the northern province of Nineveh.

And militants bombed a major pipeline carrying oil from northern Iraq to Turkey, near the town of Albu Jahash in Nineveh province.

The attack halted exports via the pipeline, a senior official from the North Oil Company said, adding that production was still continuing, but the oil was being stored.

Repairing the pipeline, which runs from the northern Iraqi oil hub of Kirkuk to the port of Ceyhan in Turkey, is expected to take between one and three days, the official said.

The attacks came a day after bombs targeting a cafe, a football field and a market in areas north of Baghdad killed 28 people.

The interior ministry on Monday announced the arrest of 82 suspected militants in Salaheddin and Diyala provinces, 56 of them at an alleged Al-Qaeda training camp.

Authorities have repeatedly highlighted security operations — among the largest since US forces departed in December 2011 — which they say have led to the killing or capture of many militants.

But whatever gains the operations have made, they have failed to stop the bloodshed.

Violence in Iraq has increased markedly this year, with analysts saying the upsurge is driven by anger among the Sunni Arab minority that the Shiite-led government has failed to address, despite months of protests.

Attacks killed 3,417 people in Iraq since the beginning of 2013, according to figures compiled by AFP — an average of more than 15 per day.