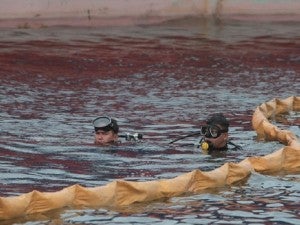 A Philippine Coast Guard team check and get samples from the oil spill over the waters of Rosario, Cavite on Friday to the fuel tanker that has affected at least seven villages in the province. INQUIRER FILE PHOTO

MANILA, Philippines – Senator Cynthia Villar wants the government to investigate the oil spill in Cavite last week to determine the cause of the leak, the extent of its damage and prevent the same from happening again in the future.

“While Petron Corporation has already owned up to the oil spill, the government should still investigate in order to determine the cause of the leak,” Villar said in a statement on Tuesday.

“The Department of Environment and Natural Resources as well as the Bureau of Fisheries and Aquatic Resources should investigate and uncover the extent of the damage of the oil spill, its causes and the steps we need to take immediately to prevent oil spills from happening again,” she further said.

If there was indeed negligence on the part of Petron, Senate President  Franklin Drilon said, the oil firm  should then pay the affected  fishermen in Cavite and   be held liable for it.

“Siguro naman they should compensate for the damage done. Sa mga mangingisda sa Cavite, dapat po magkaroon ng kompensasyon  (There should be compensation to the fishermen in Cavite),”  Drilon told reporters.

Aside from calling an investigation, Villar also saw a need for“stricter monitoring system” on oil companies’ installations and its operations.

The recent oil spill, she said, should be enough for the government to determine the regulations that are lacking and the factors that would make the country vulnerable to this kind of environmental tragedy.

“There should be a counterpart effort from the government to ensure that these companies are adhering to regulations. We should not let these companies do their own inspection and we’ll just wait for and believe the reports they submit,” said the neophyte senator.

Villar recalled a similar incident involving oil companies last year, when some 10,000 liters of diesel leaked into the sea in La Union.

She said oil spills should not be taken lightly, especially because studies suggest the effects could extend up to two generations.

“[These would have] catastrophic effects on marine life and on people living in the coastlines who depend on the sea for their livelihood,” she said as she urged for the immediate completion of the clean-up operations of the oil spill in Cavite.