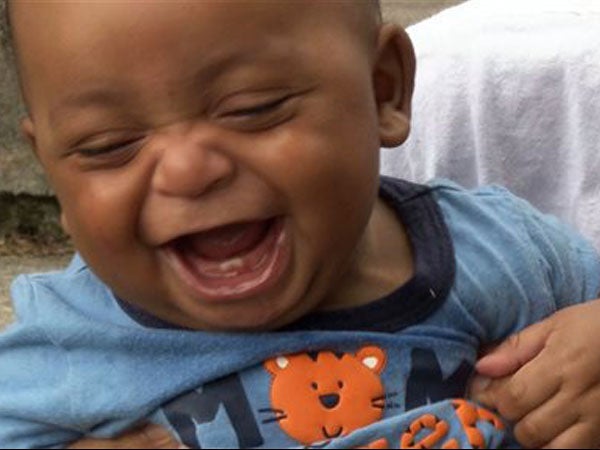 Seven-month old Martin DeShawn McCullough is held by his mom, Jaleesa Martin. A judge in eastern Tennessee changed the boy’s first name to Martin from “Messiah.” Child Support Magistrate Lu Ann Ballew ordered the name change, saying Messiah is a title that has been earned by one person “and that one person is Jesus Christ.” AP

NASHVILLE, Tennessee — A Tennessee judge’s decision to change a baby’s first name from Messiah to Martin is drawing strong reactions from people who believe the judge overstepped her powers and those who think parents’ creativity should have some limits.

Thousands of people have commented online about the judge’s order since WBIR-TV published its story over the weekend. Many of them said Child Support Magistrate Lu Ann Ballew went too far, but not all.

“I agree 100 percent that we only have one messiah and that’s Jesus Christ,” said Edith Wood, a resident of Cocke County in eastern Tennessee, where the boy lives. The mostly rural county is located in the Appalachian foothills and encompasses part of the Great Smoky Mountains National Park.

Wood said a cousin called from Atlanta and asked her to find the judge and take her out to dinner. Telephone calls to Ballew from The Associated Press rang unanswered Monday, and her voicemail was full.

The controversy started when the boy’s mother sought an order to establish paternity. It included a request for the judge to determine the child’s last name.

When Ballew heard Messiah’s first name, she decided it should be changed, too, saying the child could face problems with the name Messiah.

The name on his birth certificate was Messiah DeShawn Martin. The judge changed it to Martin DeShawn McCullough, giving the boy his father’s last name while replacing Messiah with his mother’s surname.

“The word messiah is a title, and it’s a title that has only been earned by one person, and that one person is Jesus Christ,” she told WBIR-TV in an interview from her office, which had a ceramic figurine of Joseph and Mary with baby Jesus on her desk. A copy of the Ten Commandments hung on the wall.

While Messiah may not be a traditional English name, it is becoming more popular. Messiah was No. 4 among the fastest-rising baby names in 2012, just ahead of King but behind Major at No. 1, according to the Social Security Administration’s annual list of popular baby names.

And other religious names are very common, such as Mohammed in Islamic culture and Jesus (pronounced Heh-SOOS’) in Hispanic culture.

Asked about the name Jesus, Ballew said it was not relevant to the current case.

A number of countries have rules about what are acceptable baby names. In Iceland earlier this year, a girl won a court battle to legally use the name given to her by her mother. Blaer means “light breeze” in Icelandic, but it was deemed to be not a proper feminine name by authorities, who referred to her in government documents as “Girl.”

Hedy Weinberg, director of the American Civil Liberties Union of Tennessee, said the U.S. is different because of the First Amendment of the U.S. Constitution. The amendment guarantees basic rights, including freedom of speech and separation of church and state.

“Parents, not the government, have the right to name a child,” she said. “The judge cannot impose her faith on those who come into her courtroom.”

The ACLU has offered to help the parents fight the decision.

Laura Wattenberg, the founder of babynamewizard.com, said she has been using the name Messiah as an example of changing baby names.

“The percentage of kids getting names we think of as normal is shrinking,” Wattenberg said. “Today, Paisley is more common than Mary.”

Messiah Ramkissoon, a spoken word poet based in New York City, said people sometimes assume his name is a stage name. But he said the name simply represents a messenger and doesn’t refer exclusively to Jesus. He added that many people are named Emanuel, which means “God is with us” and is another term used for Jesus in the Bible.

The baby’s mother, Jaleesa Martin, told WBIR-TV she chose the name Messiah because she likes the way it sounds and thinks it goes well with the names of her other two sons, Micah and Mason. She said she’s appealing the decision and in the meantime will still call her son Messiah.

“I never intended on that — naming my son Messiah because it means God,” she said. “And I didn’t think a judge could make me change my baby’s name because of her religious beliefs.”

Read Next
Newsbriefs
EDITORS' PICK
‘Reporter/commentator’ mauled for stealing fighting cocks
No evidence to warrant filing of homicide case vs Julian Ongpin – police
Duterte orders review of conduct of war on drugs
Miss Universe Philippines partners with JC
Who is Julian Ongpin?
Smart powers Liga Adarna Season 4: Race to the Top
MOST READ
Gordon: Senate uncovered ‘mother of all corruption’ under Duterte admin
LOOK: Angel Locsin inspires with weight loss progress
Isko Moreno reaches out to other presidential bets for unity
Who is Julian Ongpin?
Don't miss out on the latest news and information.