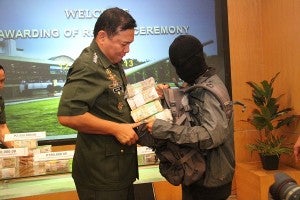 MANILA, Philippines — Ten informants received the reward money on Monday at Camp Aguinaldo for their information that led to the capture or death of key terrorist personalities and communist leaders.

The reward money shelled out by the military to the 10 informers amounted to P19.25 million.

Seven New People’s Army leaders and three Abu Sayyaf Group members were captured or killed during focused-security operations because of the cooperation of the informants.

Armed Forces of the Philippines Chief of Staff General Emmanuel Bautista personally handed the reward money to the informants.

Among the NPA leaders arrested due to the leads given by informants was Danilo Benjamin Mendoza alias ‘Rolly Panesa,’ the NPA’s Secretary of Southern Tagalog Regional Party Committee and member of the CPP-NPA-NDF Central Committee. He has a P5.6-million reward money on his head and was captured by joint police and military troops in Quezon City last October.

As many as 227 ASG personalities and 276 NPA members have been included in the Department of National Defense-Department of the Interior and Local Government Joint Orders on Reward or rewards list. A total of P140.20 million cash reward had been granted to informants for the neutralization of 115 ASG personalities from 2001 to present, and P65.73 million for the capture of 50 NPAs from 2006 to present.