The oil spill that hit at least four Cavite coastal towns has been contained, but residents continue to relay their experience and what it meant to their livelihood and health. In Rosario town, meanwhile, residents were able to exchange the diesel they gathered from the sea over the weekend for rice and canned sardines through a local government exchange scheme. VIDEO by Cathy Miranda of INQUIRER.net 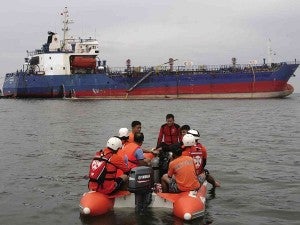 MANILA, Philippines— Philippine Coast Guard divers have found a leak in a submerged pipeline of the giant oil firm Petron Corp. off the coast of Cavite, indicating it was the source of last week’s oil spill that turned parts of Manila Bay red and adversely affected at least four coastal towns in the province.

This was disclosed to the Philippine Daily Inquirer on Monday by Commander Armand Balilo, the PCG spokesperson, noting their divers “found the leak during a diving operation on Sunday.”

“Our divers are scheduled to make a final dive today (August 12, Monday) to pinpoint and document the leak in the Petron pipe,” he said.

Balilo, also chief of the PCG public affairs office, also said they “directed our men to take an underwater footage of the leak just to make sure and confirm their finding.”

On Sunday, he said PCG divers would check if the diesel oil flowed out of a submerged pipeline or a tanker moored off the municipality of Rosario.

Garcia, in a statement, said “our personnel discovered a leak continuously flowing out of the submerged Petron pipeline.” He did not provide other details.

The spill was first spotted about three kilometers off the coast of Rosario on Thursday afternoon.

Cavite Governor Juanito Remulla earlier downplayed the effects of the oil spill, telling reporters “there were no evident signs of a fishkill, no damage to properties, although we are still waiting for the results of the marine tests.”

He claimed that only 90,000 liters of diesel oil had spilled into the waters off the towns of Rosario, Naic, Tanza and Ternate.

However, an aerial survey conducted by the Coast Guard showed an estimated 500,000 liters of diesel might have leaked into the polluted bay.

Meanwhile, the left-leaning fisherfolk group Pamalakaya, short for Pambansang Lakas ng Kilusang Mamamalakaya ng Pilipinas, called for an independent inquiry into the Cavite oil spill as it accused both Malacañang and the Coast Guard of being “biased for Petron Corp.”

“An independent probe is called for because the PCG is now singing the same tune as the Palace, which has ordered a slowdown on the investigation of the oil spills and instead focus mainly on the cleanup of the oil slick,” said Pamalakaya vice chair Salvador France.

Like Malacañang, the Coast Guard “should not be involved in the investigation. They should stop intervening in behalf of Petron as if they’re the oil firm’s legal counsels.”

“Petron should not also be allowed to join the team of probers because it is the subject of the inquiry being the cause of the latest environmental tragedy,” France also said.

In a related development, an undisclosed number of Cavite fisherfolk are set to file criminal charges against Petron for the oil spill.

Cavite fisherfolk are suing Petron to “stop this running episode of environment death and destruction in Rosario and adjacent towns in Cavite,” he said.

He recalled that in 2010, Petron “provided affected fishermen with loans with 12 percent annual interests. But only a few fisherfolk availed of those loans.”