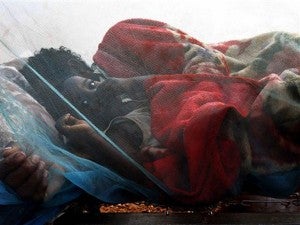 A homeless Sudanese family rests on the side of a highway in Khartoum, Sudan, Tuesday, Aug. 6, 2013 as heavy flooding threatens the region. AP FILE PHOTO

“Thirty-six people were killed in Nile state and 5,000 houses were destroyed because of heavy rain and floods,” Radio Omdurman reported.

The brief report by SMS did not specify over what time period the fatalities occurred but heavy rains affected Khartoum and the surrounding region again on Friday, following earlier flooding which began on August 1.

Driven by vicious winds and accompanied by lightning, the rain on Friday lasted about four hours in Khartoum, where even modern apartment buildings suffered leaks.

Many Sudanese live in one-room homes built of mud bricks which can easily wash away.

An AFP photographer on Saturday found the outskirts of Khartoum turned into a lake, where some simple homes had been destroyed or damaged.

Residents whose houses were still standing had dragged their belongings outside, where some sat on beds trying to stay above the brown water.

Drainage is poor in the capital, where even a little rain can cause flooding.

Before the latest deluge this weekend, the United Nations said heavy rains and flash floods in Khartoum and other parts of Sudan had killed 11 people and affected almost 100,000 others this month.

The UN’s Office for the Coordination of Humanitarian Affairs (OCHA) said the capital region and Nile state were the worst hit, but that five other states were also inundated.

Eight of the 11 deaths occurred in the greater Khartoum area, where almost 60,000 people were affected, according to data cited by OCHA from the Sudanese Red Crescent Society and another local humanitarian group.

It said more than 14,000 houses had been destroyed or damaged in the affected states.

But a volunteer youth group, Nafeer, gave a much higher estimate on Friday before the latest heavy rains.

In a statement, Nafeer said that at least 14,517 houses and more than 72,000 people were affected in four districts alone on the edge of Khartoum.

Nafeer said it based its figures on research that included questionnaires completed by people affected by the floods.

“Some families are still living in nearby schools and in harsh conditions; many areas are without electricity or means of transportation,” Nafeer said.

It added that there was an urgent need for water in the areas which it visited.

“Families in these areas have been surviving on unsafe tank water that is sold at double the regular price. In addition, markets in affected areas have been flooded and food prices (if available) have since soared,” Nafeer added.

SMC also reported on August 4 that 19 people were killed when a passenger bus and a truck collided, south of the Nile state capital Ed Damer.

The report did not say whether flooding played any role in the crash.