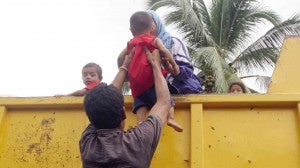 MIDSAYAP, North Cotabato—Despite being preoccupied with renegade Moro rebels in the nearby towns of Pikit and Aleosan, soldiers and policemen here forced a kidnap gang to free their victim, the 19-year-old son of a retired soldier on Saturday evening.

Infantry Battalion and local policemen put up a roadblock after receiving an alert on the abduction of Mark Anthony Baya (not Bayan as earlier reported) by car-riding suspects in Barangay Tumbras around 7:20 p.m.

He said with the victim in tow, the gunmen boarded a grey car and sped off toward nearby Datu Piang in Maguindanao.

“The timely information reached the police through the bantay-bayan (neighborhood watch) and authorities responded just in time,” he said.

He said soldiers and policemen put up a roadblock in Tumbras and nearby Nabalawag village, forcing the kidnappers to detour and take another route towards Datu Piang.

“Soldiers saw them and fired warning shots. A chase was put up and all of these actions forced the suspects to abandon the victim in Barangay (village) Malingao at 7:45 p.m.,” delos Santos said.

It was in Malingao that Baya was recovered, less than 30 minutes after being kidnapped, he said.

The police and military action against the kidnappers was conducted even as soldiers continued to battle Bangsamoro Islamic Freedom Fighters (BIFF) gunmen, who attacked villages in the borders of Aleosan and Pikit towns on Friday.

Three BIFF members have so far been killed in the clashes while two soldiers were also injured.

Authorities reported the arrest of a kidnap suspect, said to be

involved in the kidnapping several months ago of Jeffrey Lim, mayor of Salug, Zamboanga Sibugay, and other victims from that province, on the same day. 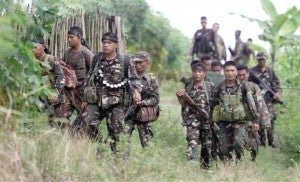 Quoting the victim, Malayo said she was abducted by four armed men aboard a bus while she was heading home from Liloy town, also in Zamboanga del Norte.

“She was forced to board another bus for Ipil, Zamboanga Sibugay, and then transferred to another vehicle. They also demanded that the woman produce some amount for her liberty,” Malayo said.

He said Acas was able to produce only P7,000 because it was the only amount she had on her pocket.

The abductors, Malayo said, held on to her as they demanded more.

“She was held for six days here before releasing her (on Aug. 8),” Malayo said.

Acas and Malayo were mum if ransom were paid to the abductors.

Malayo also declined to provide additional details on the identity or location of the suspects.

“We cannot release yet the identities and exact place as our enforcers are trying to capture them,” he said.

Baranquillo said Sehar Muloc, the prime suspect in Lim’s kidnapping, was arrested by joint elements of the Naval Intelligence and Security Group, the 102nd Infantry Brigade and the Zamboanga Sibugay police office near the Pasalubong Center in Poblacion, Ipil, Zamboanga Sibugay, past noon of Aug. 8.