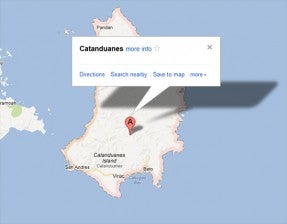 LEGAZPI CITY, Philippines — At least 33 fishermen were reported missing since Saturday by the Catanduanes Provincial Disaster Risk Reduction and Management Council (PDRRMC, a disaster official of the province said Sunday.

Edna Bagadiong, PDRRMC-Catanduanes spokesperson, said in a phone interview that the 33 missing fishermen were from the towns of Pandan (14), Gigmoto (eight), Virac (eight) and Bagamanoc (three).

Bagadiong, quoting a PDRRMC report as of 11 a.m. Sunday, said the initial count of missing persons was placed at 40 but seven fishermen were able to return home.

She said the missing fishermen went fishing on Saturday despite the warning of an upcoming typhoon.

Meanwhile, a fire of yet undetermined origin broke out Sunday noon in a commercial building in San Juan Street, Virac amid heavy rains, Bagadiong said.

As of noon Sunday, disaster officials said the number of stranded persons in ports across Bicol rose from 2,000 to 3,485, most of whom in the port of Matnog in Sorsogon; 107 in Occidental Mindoro; 250 in Quezon; and 300 in Batangas.

In Calabarzon (Cavite, Laguna, Batangas, Rizal and Quezon), typhoon Labuyo on Sunday brought, so far, only an overcast weather, coupled with drizzles, over parts of the region but had also prevented sea vessels from sailing, stranding hundreds of passengers in at least three ports.

In Quezon, 250 were stranded at the Dalahican port, while the number of marooned passengers at the Batangas port increased from 300 Sunday morning to 400 by noon, Calabarzon DRRMC director Vicente Tomazar said.

Disaster authorities stayed on guard against flash floods and landslides with a public storm signal number 3 hoisted in Polilio Island in Quezon.

In Lucena City, 250 were stranded at the Dalahican port, while the number of marooned passengers at the Batangas port increased from 300 Sunday morning to 400 by noon, Tomazar said.

Disaster authorities stayed on guard against flash floods and landslides with a public storm signal number 3 hoisted in Polilio Island, he said.

In Cavite, Tomazar said they hoped the rains would help disperse the remaining oil sheen in Manila Bay after an estimated 500,000 liters of diesel spilled into the water near the coastal town of Rosario on Thursday.