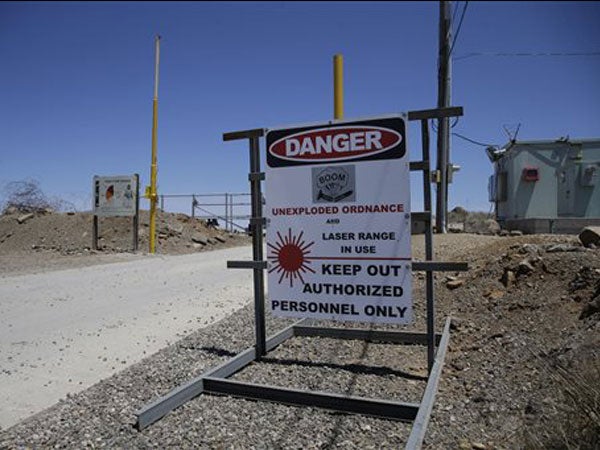 A sign warns visitors of the dangers involved when entering the seaside hills of San Clemente Island, where North America’s rarest bird calls home Wednesday, July 17, 2013. In the decade since the Navy left the Puerto Rican island of Vieques, bombardments and live-fire trainings have grown exponentially on this windswept California island, which has special federal status because of its biological diversity. Since then, endangered species like the island fox, night lizard and loggerhead shrike have grown in number too, thriving alongside the blasts after nearing extinction. AP

Despite the weekly explosions that rock this Navy-owned island off the Southern California coast, the San Clemente Island loggerhead shrike has been rebounding from the brink of extinction, even on the military’s only ship-to-shore bombardment range.

The black, gray and white songbird — which has gone from a low of 13 in the 1990s to 140 today — is among scores of endangered species thriving on military lands during the past decade.

For many, it’s a surprising contrast, with troops preparing for war, yet taking precautions to not disturb animals such as the red-cockaded woodpecker and thumb-size Pacific pocket mouse. But military officials downplay the relationship, saying they’re concerned primarily with national security.

Defense spending on threatened and endangered species jumped nearly 45 percent over the past decade from about $50 million a year in 2003 to about $73 million in 2012. The military protects roughly 420 federally listed species on more than 28 million acres (11.3 million hectares), according to the Pentagon.

The Defense Department is increasingly partnering with environmental groups to buy critical habitats that can act as buffer zones around bases, including a deal announced in June near the Army’s Joint Base Lewis-McChord in Washington state that will restore prairie habitat.

“I’ve seen entire convoys with dozens of soldiers come to a screeching halt because a desert tortoise was crossing the road,” Pentagon spokesman Mark Wright said.

Environmentalists say there has been an attitude shift by the Pentagon, which has a history of seeking exemptions from environmental laws in the name of national security.

“They’ve come a long way and do deserve credit,” said Mark Delaplaine, of the California Coastal Commission, which has battled the Navy over sonar testing that it believes harms marine mammals. “They pummel areas but also protect areas.”

The more wildlife thrives, the fewer the restrictions. If endangered species populations decline further, the military could face being told to move training exercises out of certain areas.

“Our conservation efforts are first and foremost focused on protecting readiness and eliminating the need for restrictions on training,” said John Conger, acting deputy undersecretary of defense for installations and environment.

Defense Department properties have the highest density of threatened and endangered species of any federal land management agency, according to NatureServe, which tracks wildlife.

On average, military lands boast 15 threatened and endangered species per acre — nearly seven times more per acre than the U.S. Forest Service, according to the Pentagon.

In some areas, native plants that thrive from a natural cycle of wildfires have benefited from the artillery exercises, according to environmentalists. Troops also often use only a limited area for training, including on San Clemente.

The endangered perch-like fish called the Okaloosa Darter was downgraded in 2011 to threatened after Eglin Air Force base in Florida restored its watershed with erosion control projects, according to the U.S. Fish and Wildlife Service.

The threatened San Clemente Island lizard, which now numbers more than 20 million, is being considered for removal from federal listing.

“They’re doing some good things for endangered species, which is great, but there are activities that are really damaging to the environment at the same time,” said Noah Greenwald of the Center for Biological Diversity.

He pointed to the Navy’s sonar testing. Greenwald’s organization and other groups last year filed a lawsuit against the National Marine Fisheries Service for failing to protect marine mammals from noise brought by Navy warfare training exercises along the coasts of California, Oregon and Washington state.

San Clemente Island gained its unique status after protests shut down the Navy’s only other such bombardment range on Vieques Island off the coast of Puerto Rico, where the Navy trained from 1941 until 2003.The property is now a national wildlife refuge.

“If we were to abuse the island, we would lose it,” he said.

Sniper fire must be routed to avoid nests of endangered birds. Yellow road signs warn motorists to watch out for the island’s native fox, whose population has grown from hundreds in the 1990s to more than 1,000.

Plywood models of tanks and missiles poke through native shrubs with flittering San Clemente Island sage sparrows, found only on the island. Troops zero in on the makeshift targets but cannot fire in sensitive areas. Ramps prevent beach erosion for the threatened western snowy plovers, whose nests are moved to avoid tanks.

Biologists say the biggest impact has been the military’s eradication of goats in the 1990s, which were introduced half a century before the Navy purchased San Clemente in 1934.

For biologists, what’s been surprising is the resiliency shown by certain species to the thundering drills. The shrike nests even in the center of the bombing range called the “boom box.”

“The shrike seems to be unaffected by the loud noises,” said Navy biologist Melissa Booker. “We have a role to support the military’s mission, and we have a role to protect species. The two things don’t have to contradict each other.”