Cordillera needs funds most, but gets lowest budget 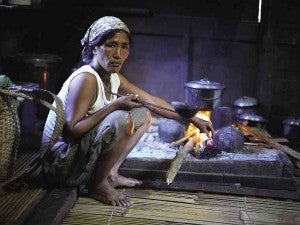 THE ABSENCE of luxury does not mean poverty for this small village in Lubuagan, Kalinga province, but authorities have taken note of the slow growth in upland provinces of the Cordillera Administrative Region. EV ESPIRITU/INQUIRER NORTHERN LUZON

BAGUIO CITY—The Cordillera Administrative Region is getting the smallest share in the proposed 2014 national budget, despite evidence that it needs more support given its poor 2012 economic performance, the Department of Budget and Management (DBM) said here on Thursday.

Liza Fangsilat, DBM Cordillera director, said the upland region was receiving P31.7 billion, the lowest allocation in the proposed budget measure, which, she noted, “is not enough.”

The Cordillera economy posted only a 1-percent growth in last year’s gross regional domestic product (GRDP). The tailings dam accident that caused Philex Mining Corp. to stop operations in 2012 may have helped pull the economy down, according to an official of the National Economic and Development Authority (Neda).

The GRDP measures the value of goods and services in a region.

According to DBM data, Calabarzon (Cavite, Laguna, Batangas, Rizal and Quezon, which make up Southern Luzon) would be receiving the highest share amounting to P130.2 billion, followed by Metro Manila with P128.4 billion and Central Luzon with P88.9 billion.

Speaking on the sidelines of a DBM forum, Fangsilat said the Cordillera was still hampered by a small population, a primary factor for allocating government resources.

However, she said, the region had the highest per capita income in the country, which means that the government spends more for every Cordilleran compared to people in other regions.

Neda Cordillera director, described the Cordillera economy as “unsustainable,” having posted a sustained drop from a

Rimando said the Department of Public Works and Highways provided stimulus growth by building new roads and raising construction spending by as much as P700 million, which was reflected in 2012 as an

But this was not enough to rouse the economy, Rimando said.

54.8-percent growth, she said. In 2011, the mining performance was equally poor, posting a negative 9.3 percent.

“Through the years, our mineral production has been declining, and in 2012, Philex [operations] were suspended,” Rimando said.

Philex has been the region’s only high-performing mine, but the Mines and Geosciences Bureau  stopped its operations in Benguet province when a breach in its tailings storage facility accidentally discharged up to 20 million tons of mine wastes into a creek in Itogon town.

After a cleanup and after paying more than P1 billion in fine, Philex was allowed to continue its operations this year.

“Our agriculture is very small in terms of its contribution to the economy,” Rimando said, posting only a 10-percent growth, but half of the region’s work force are employed in the farm sector.

In Dagupan City, Juan Ngalob, Neda Ilocos director, said the Ilocos region’s economic performance had been sluggish through the years, posting a

Ilocos region businessmen urged the government to speed up the development of special economic zones in the Ilocos provinces.

Nelson Yuchongtian, vice chair of the Philippine Chamber of Commerce and Industry, submitted a manifesto to the Neda expressing their desire for “the development of special economic zones in Region 1, particularly for airports and seaports.”

“I have been upset because the government has not been supporting the development of ports,” he told a news briefing on Aug. 9.

“Singapore and Congo have small areas but they progressed because of their ports. We need [to improve] ports in the region like  Poro Point in La Union. There is a need to expand the ports in Luzon for faster delivery of goods,” Yuchongtian said.

He said the Ilocos region was strategically located and could provide better access for industries. The region operates an economic zone in Laoag City, Vigan City, the Poro Point facility in San Fernando City, La Union, and the Sual Industrial Estate Development Zone in Pangasinan.

Read Next
Gov backs coal plant amid Church opposition
EDITORS' PICK
Gear up and get ready to play with Yamaha Mio Gear
If elected VP, Sara Duterte will push for mandatory military service for all Filipinos
Over 3 Million worth of prizes to be won at Smart Padala’s SENDali Manalo Promo!
Acer starts the year off strong with the Aspire Vero National Geographic Edition
Senate bill seeks to penalize employers requiring employees to work during rest hours
Marcos-era elections: Not what his son signed up for
MOST READ
Vice mayor slams Vico Sotto for turning Pasig into a ‘puro palabas’ city
Jose Manalo’s son Benj pays tribute to late mother: ‘You’re a testimony of God’s love’
‘Sampal sa gobyerno:’ Drilon wants unvaxxed PAO chief barred from working
Bongbong-Sara tandem names 7 candidates in initial senatorial slate
Don't miss out on the latest news and information.