Art Deco outside, cobras inside: 1920s building saved in Muntinlupa 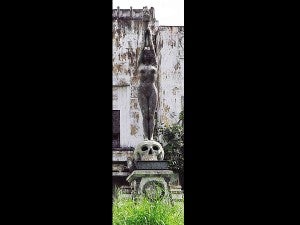 TRIUMPH OVER TIME An enlarged reproduction of Dr. Jose Rizal’s sculpture titled “Triumph of Science Over Death” greeted visitors at the BPS building during its heyday. VEEJAY VILLAFRANCA

The plight of the Biological Production Service (BPS) building in Alabang, Muntinlupa City, which was constructed in 1924, was first featured in the Inquirer in November 2000. This was four months after the Jai Alai Building on Taft Avenue, built in 1939, was pulverized during the administration of Manila Mayor Lito Atienza. The demolition left heritage conservation advocates praying the BPS (inaccurately referred to as the old Department of Health building) would not be the next heritage building leveled to the ground.

After more than 13 years awaiting its fate, the three-story Art Deco building no longer faces an uncertain future. The dilapidated white building, which is visible from the east wing of Filinvest’s Festival Supermall in Alabang and from the South Luzon Expressway overpass, is safe from the wrecking ball.

Even from a distance, the geometric forms of its steel-and-concrete façade, a hallmark of classic Philippine Art Deco, are striking and dramatic. The now damaged sculpture of a naked woman, holding a torch over her head and standing on a skull, a replica of Rizal’s “Triumph of Science Over Death,” still stands as a proud symbol of the institute despite the wild vegetation growth around it.

The structure was the last of the buildings built in the 1920s to house facilities for the manufacture of vaccines and sera in the country. It rose on a 110-hectare lot then called the Alabang Serum Vaccine Laboratory (ASVL) compound .

In a fortunate turn of events, Filinvest Alabang Inc. (FAI) will breathe new life into this long-neglected and overlooked architectural treasure. Instead of demolishing it to build a new structure, the real-estate developer favored adaptive reuse, a growing worldwide practice of modifying heritage buildings for new uses while retaining their historic features.

The rich history of the BPS may be traced back to the Spanish period. In the early 19th century, King Charles IV of Spain sent a scientific expedition to the Philippines headed by Dr. Francisco Javier de Balmis, mainly to look into the smallpox problem. After the mission, the central board of vaccination was created in 1806 and became the forerunner of ASVL.

When the Americans took over in 1900, the Bureau of Science assumed the function of the Board of Vaccination under its Biologics Division.

For the 2000 article, this writer met Herminio Montillano, who was 9 years old when his father worked as a security guard at ASVL in 1945. The war had just ended but remnants of the facilities’ previous occupants were still felt and visible. The Japanese army had converted the main building into a hospital at the height of the war, leaving the corridors still smelling of medical supplies—and death.

The underground bomb shelter the soldiers had dug was still there—and so were the Philippine cobras. The Japanese released all the snakes from the ASVL serpentarium weeks before Liberation to booby-trap the area against the advancing Americans.

For a young boy, these were fascinating discoveries. Mang Hermie recalled how he looked forward to his daily trips to the compound to bring his father’s lunch. “It was a lovely place to grow up in,” he said. “The Mangangate River on one side of the compound supplied the farm animals with fresh drinking water while families gathered along its banks for picnics in the shade under acacia trees.”

Montillano and the other employees’ children were taught to appreciate the roles played by white mice, guinea pigs, goats and horses in the work being done at ASVL. They were taught to respect, more than fear, the cobras. 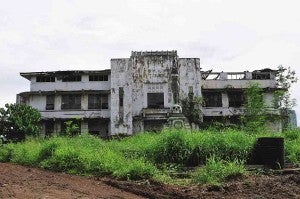 SAVED FROM THE WRECKERS The 89-year-old BPS building will soon be a showcase of heritage conservation through the adaptive reuse of aging structures. VEEJAY VILLAFRANCA

“This was my second home, where I saw all the miracles happen,” he recalled. “I saw countless people brought in dying from a cobra or insect bite and were saved by the antivenin we produced. People with TB and other tropical diseases came to ASVL from far-off provinces seeking a cure or bringing their children for vaccination.”

Historical records on the construction of the BPS have been hard to find, but Manuel Maximo Lopez del Castillo-Noche, an architectural historian, believes the building may have been designed by either Juan Arellano or Juan Nakpil, the two leading architects who introduced Art Deco in the Philippines.

“It may be Arellano because of the decorative moldings on the façade and the fact that it was a government building. Arellano was a government architect,” Noche said, noting that the BPS’ entrance closely resembles the side entrance of the Metropolitan Theater in Manila, another Arellano creation.

“Because Art Deco buildings are few and far in between, they should be treasured,” Noche stressed. “I feel good that another heritage building is being saved for future generations to appreciate, since some architects (today) prefer to demolish (old buildings) and erase their history. Few are willing to highlight the old.”

Work at the BPS ended more than 13 years ago when operations were moved to a new complex (on land donated by Filinvest) beside the Research Institute for Tropical Medicine (RITM). The building had since languished in silence, reduced to a dark curiosity amid high-rise structures and upscale malls.

In 2009, in line with the company’s expansion plans, FAI president Josephine G. Yap made the crucial decision to save the entire BPS building—not just its façade—and have it integrated into the new wing of Festival Supermall.

In April 2011, the Filinvest planning team presented its restoration and integration plans to the Muntinlupa City council and the National Historical Commission of the Philippines (NHCP).

“Our plans were accepted with an agreement that a portion of the building will serve as a museum under the care of the tourism council of Muntinlupa,”  said Rose Nuqui, Filinvest vice president for marketing commercial centers.

“Restoring a building that is close to a century-old is not easy,” George Domingo, Filinvest assistant vice president for business development. “It took more than a year to plan the complete restoration. The cost will be enormous but we are committed to see the project through and proud to have an opportunity to foster a better appreciation of Muntinlupa’s heritage.”

Groundwork for the restoration project is now in full swing.

The building’s history has gone untold and nearly forgotten years after it ceased serving its original purpose and despite the role it played in saving countless lives after the war. The BPS building has never been on Muntinlupa’s list of historical landmarks.

But this could change very soon. The NHCP sees Filinvest’s decision as a sign of the Filipinos’ growing awareness of their heritage.

“The building is presumed to be an important cultural property (ICP) per Republic Act No. 10066, the National Heritage Act of 2009,” according to Wilkie Delumen, architect and head of the commission’s historic preservation division.

Other developers and real-estate owners who wish to take the same high road “should first coordinate with the NHCP before undertaking any development that might affect heritage sites and structures,” Delumen added. “Developers may also avail themselves of incentives offered by the Board of Investments.”

The BPS building is having not only the happy ending it deserves but also a new purpose: as a link to the past and a monument to the people who, in  working there, kept traditional values and the nobility of public service alive, ideals which like the building itself should never be left to crumble.