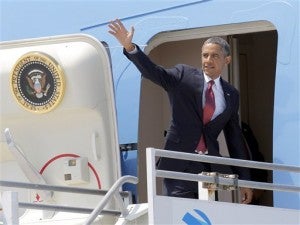 US President Barack Obama waves from the door of Air Force One. (AP Photo/Nick Ut)

According to the report, Obama met on Thursday at the White House with Apple CEO Tim Cook, AT&T chief Randall Stephenson, and with Vinton Cerf, a renowned technologist considered one of the “fathers” of the Internet and currently a Google employee.

Wanted on US espionage charges, Snowden has taken refuge in Russia, which last week granted him temporary asylum, infuriating Washington.

Asked about the meeting, the White House declined to confirm it took place. It did not appear on Obama’s official agenda.

According to Politico, the White House had previously invited business leaders and interest groups to a meeting Tuesday with senior administration officials to discuss the issue.

Since Snowden’s revelations, Obama has insisted that the surveillance programs are legal and have helped to save lives by preventing attacks. He also has assured Americans that no one is listening in on their telephone calls.

The programs routinely scoop up the phone records of millions of Americans and monitor Internet and social media exchanges for foreign intelligence purposes.

White House spokesman Jay Carney said on June 11 that Obama welcomed a debate on the surveillance but that it was necessary to strike a balance between security and privacy.