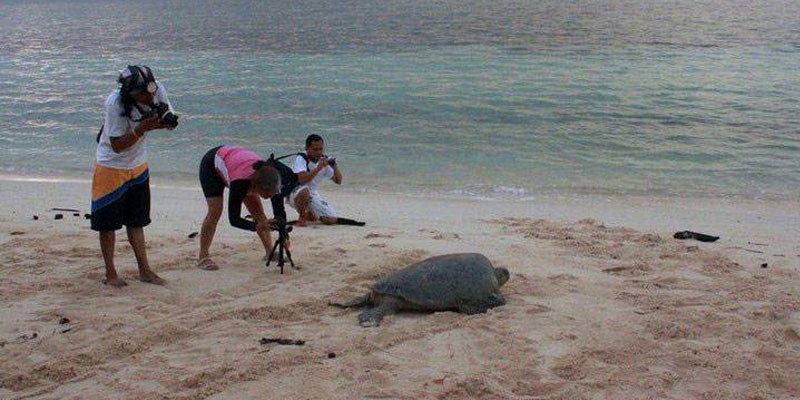 SYDNEY—Endangered green turtles are ingesting more man-made debris, including potentially lethal plastic products, than ever before, a new Australian study has shown.

The majestic turtles are significantly more likely to swallow plastic than they were in the 1980s, the study, published in the journal Conservation Biology, showed.

The research reviewed scientific literature on the ingestion of man-made rubbish in the ocean by sea turtles published since 1985.

It showed that six of the world’s seven species of sea turtles have been found to ingest debris, and all six are listed as globally vulnerable or endangered.

“We found that for green sea turtles, the likelihood that a sea turtle has ingested debris has nearly doubled in the last 25 years,” Qamar Schuyler from the University of Queensland, who led the study, told AFP on Friday.

“Specifically for green turtles, it does appear that they are eating a lot more debris than they used to.”

The study found that the likelihood of a green turtle, which can grow to 1.5 metres (five feet) and live for 80 years, ingesting debris jumped from about 30 percent in 1985 to nearly 50 percent in 2012.

The research said it was clear that since the first data was recorded more than 100 years ago, the amount of refuse leatherback turtles had ingested had also increased.

Plastic products eaten by turtles and other marine life can be lethal, killing the animals by either blocking their stomachs and starving them or through puncturing their intestinal system.

Schuyler said ingested plastics could also be releasing toxins into the animals, either via chemicals in the plastics themselves or which the products have absorbed as they have floated around the ocean.

“The animal may not die of that right away but it may impact things like their reproductive cycle and that has longer-term consequences,” she said.

Schuyler, a doctoral candidate, said the data showed that turtles washing up with lots of plastic in them were not necessarily found in the most polluted or populated places.

“So it means that they are ingesting that debris usually somewhere farther away from where they end up,” she said, adding that this suggested that a global response was needed to counter the problem.

“What we really need to look at is a large scale movement to stop debris entering the oceans.”

The research, analysing 37 studies published from 1985 to 2012 which reported on data collected from before 1900 through to 2011, found that turtles in nearly all regions ingested debris, most commonly plastic.

“Our results show clearly that debris ingestion by sea turtles is a global phenomenon of increasing magnitude,” the study said.