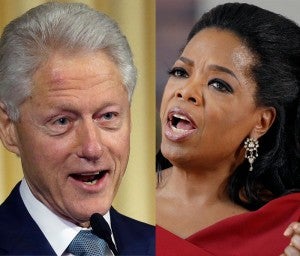 Clinton and Winfrey are among 16 recipients of the prestigious Presidential Medal of Freedom, an award created 50 years ago by John F. Kennedy.

“The Presidential Medal of Freedom goes to men and women who have dedicated their own lives to enriching ours,” Obama said in a statement.

“This year’s honorees have been blessed with extraordinary talent, but what sets them apart is their gift for sharing that talent with the world,” he said.

“It will be my honor to present them with a token of our nation’s gratitude.”

Clinton, who turns 67 at the end of the month, was in the White House from 1993 to 2001 and has since focused on his foundation. He also worked tirelessly on Obama’s 2012 re-election campaign.

Oprah, who presides over a media empire, is often seen topping lists of most powerful celebrities. She has been a stalwart backer of Obama’s political aspirations, in particular his 2008 presidential campaign.

Other recipients of the medal, to be awarded at the White House later this year, include women’s rights activist and writer Gloria Steinem and the former executive editor of the Washington Post, Ben Bradlee, who oversaw coverage of the Watergate scandal.

The medal will also be awarded posthumously to astronaut Sally Ride and to longtime Hawaii lawmaker and World War II hero Daniel Inouye.