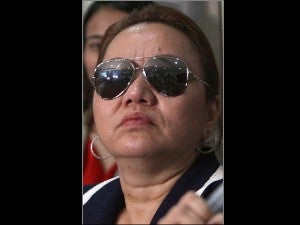 Henares said the Bureau of Internal Revenue (BIR) began the investigation after the Inquirer published a series of reports on the alleged involvement of Napoles in the diversion of funds from lawmakers’ Priority Development Assistance Fund (PDAF) to ghost projects of bogus nongovernment organizations (NGOs).

“She did say she had many properties … If you have many properties there won’t be any problem if you are paying the right taxes,” Henares said at a news briefing at the Department of Justice where she announced the latest tax evasion cases filed by her office.

“If what Napoles said is true, these are legitimate income and they paid taxes for it, then there is nothing to fear,” she said.

“We can’t really tell you where we are now and what is going on in the investigation. Suffice to say, it’s ongoing … All I can do is assure you it’s a comprehensive investigation,” she said.

Lorna Kapunan, Napoles’ lawyer, said Thursday that the incorporation papers reported in the Inquirer proved that Napoles had no hand in the creation of the 17 fake NGOs being linked to the businesswoman that were allegedly used in the pork barrel scam.

Kapunan, however, was silent on the linkages between companies owned by the Napoles family and the 17 NGOs that shared common incorporators, auditors and notary public lawyers. The presidents of the NGOs  were employed at the Napoles-owned JLN Corp.

“You have again twisted the statement of (former General Hermogenes) Esperon and reported a falsehood. The coal company in the Philippines has not taken off because of the high costs of bringing coal to the Philippines (e.g. Napocor rates). AStar Power (Philippines) has no business here since it was formed some two years ago. It is the coal company in Indonesia where Napoles owns shares that is making money,” Kapunan said in a text message to the Inquirer.

Kapunan was reacting to a statement by Esperon who said: “I have been reading a lot about Napoles’ wealth and I can tell you it did not come from coal trading. I know it came from somewhere else and just like everyone, I’d also like to find out the truth behind all these things.”

Esperon on Thursday clarified that he was only talking about his experience with the Napoles-controlled coal trading company, Asia Star Power Resources Corp., which he had personal knowledge of and not the coal business which Napoles had been alluding to since July 23 in an interview with ABS-CBN News anchor Korina Sanchez.

The retired general quit after only six months in AStar Power because Napoles’ husband, AStar Power chair Jaime Napoles, could not come up with the $7.5 million he committed to the coal venture.

“I resigned from AStar Power but I do not know whether they continued with it or the coal business. AStar Power was not a shell company while we were there. We really sweated it out,” Esperon said.

In the Sanchez interview, Napoles, her husband and two children, James and Jo Christine, explained that the family’s wealth came from “a successful business in coal export and trade to China, India and Pakistan, and other (countries) since the 1990s.”

Sanchez also talked to “a longtime business partner (of the Napoleses) who flew in to testify to the legitimacy of the Napoles family business.”

The unidentified business partner said: “In 1998, we grew together up to right now. Now we have become bigger. In Jakarta, we have property, around 650 hectares.”

While the Indonesia coal venture should explain the Napoles’ family fortune, Kapunan claimed that the Inquirer’s documents culled from the Securities and Exchange Commission proved that her client had no connection with the 20 bogus NGOs as charged by her former employees and now pork barrel scam whistle-blowers Benhur Luy and Merlina Suñas.

“Your own documents speak for themselves. Mrs. Napoles is neither incorporator, director, officer and yet you believe the hearsay, self-serving statements of your sources who claim that Mrs. Napoles ‘authorized them.’ Suñas herself said she was the one who incorporated all these companies and Luy confessed he forged signatures of some senators and congressmen,” Kapunan said.

“Shouldn’t you be questioning them and not Mrs. Napoles? Or maybe you are acting under the instructions or payroll of the powers that be as our sources allegedly claim?” Kapunan asked.

Kapunan echoed the claim of Sen. Ramon Revilla Jr. who said that his inclusion in the pork barrel scam was part of a “smear campaign” engineered by the Aquino administration. Luy said that Revilla used fake NGOs for his pork barrel 22 times, the most among five senators implicated.

Kapunan, however, was mum on the common pattern that emerged from the SEC documents:

— Vanessa A. Eman, the president of Abundant Harvest for People’s Foundation Inc. (a fake NGO), is listed as one of the incorporators of JLN Construction formed by Napoles in 2008.

— JLN Construction also listed as a stockholder Andres B. Atan who Luy claimed was a relative of a barangay (village) captain named Bruce Atan from Toril District in Davao City. (Bruce Atan was the middleman between Napoles and Davao City Rep. Isidro Ungab, chair of the powerful House appropriations committee who tapped Kaupdanan para sa Mangunguma Foundation Inc., to access P13 million of his pork barrel funds in 2011. Kaupdanan is said to be controlled by Napoles).

— Jo-Chris Communications Inc. had a president of a bogus NGO in its 2002 incorporation papers, Gertrudes K. Luy, president of Bukirin Tanglaw Foundation Inc.

Accountant Mario C. de la Cruz prepared the 2011 financial statements of both Jo-Chris and JLN Construction as well as nine of the 17 NGOs reviewed by the Inquirer (another accountant, Susan Victorino, handled four).

Lawyer Editha P. Talaboc notarized the incorporation papers of 11 of the 17 NGOs while Mark Olivero notarized the papers of JLN Construction and three fake NGOs and Joel Gordola notarized Jo-Chris and one fake NGO.