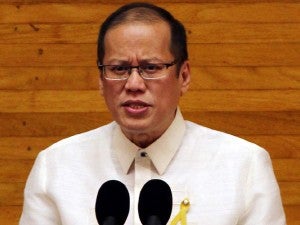 DAVAO CITY, Philippines—President Benigno Aquino III warned groups behind the recent bombings in Mindanao that they would be dealt with severely by the state.

“To those willing to partner with us for peace, we welcome you as brothers; but to those who want to challenge the authority of the State, you will feel the full brunt, depth, and might of the State’s response,” the President said in a speech to delegates to the 22nd Mindanao Business Conference here on Thursday.

“You will not get in the way of the peace and the stability that will help fulfill the potentials of Mindanao,” the President added.

The President told reporters afterward that he would meet with the security cluster of his Cabinet when he got back to Manila to track down the perpetrators of the bombings, which have been going on intermittently in various parts of Mindanao since the Moro insurgency began in 1972.

Mr. Aquino said he was not at liberty to say how the government would go about neutralizing the armed groups although he indicated that rewards for information leading to the arrest of the perpetrators would be given.

The President said investigators were also looking into the possible involvement of the Bangsamoro Islamic Freedom Fighters, a group that broke away from the Moro Islamic Liberation Front over differences on the matter of peace talks with the government.

On Wednesday, seven soldiers were wounded in a roadside bomb explosion that occurred as an military convoy passed through the town of  Shariff Mustapha Saydona in Maguindanao.

Abu Misry Mama, spokesman of the BIFF, admitted his group was behind  attack. He denied, however, that BIFF guerrillas had a hand in Monday’s car bomb explosion in Cotabato City that killed eight people dead and wounded at least 40 others.

Mr. Aquino told reporters that while at least three threat groups had banded together, “desperate to destroy peace in Mindanao,” he said these groups did not have the capability to sow widespread terror.

“All they have are ‘aspirational’ plans,” he said. “’Aspirational’ because they’ve been declaring to launch attacks everywhere, but as to their capability, they still don’t have it.”

The President said the government had received information that the people behind the July 26 bombing in Cayagan de Oro in which eight people were killed had links to Gumbahali Jumdail alias Doc Abu of the Abu Sayyaf who was killed in February last year. Mr. Aquino, however, did not elaborate, saying he had to get to a meeting.

Col. Carlito Galvez, commander of 104th Army Brigade, said the raid was carried out after they received “A-1 information” about the assembly of top Abu Sayyaf commanders in that area.

Galvez said Abu Sayyaf leaders Nurhassan Jamiri, Puruji Indama and others  “were plotting large-scale terror attacks as soon as the fasting is over.”

A military source said the troops recovered around 30 improvised explosive devices in the house. No arrests were made but a soldier and three Abu Sayyaf men were killed in the fighting.

The military source said the bombs were ready for use and were supposedly intended for the cities of Lamitan, Isabela, Zamboanga, Pagadian and other places  in the provinces of Zamboanga Sibugay and Zamboanga del Sur.

“For the past 40 years, thousands of families in Mindanao have been displaced and, at times, even harmed by skirmishes,” Aquino told the business forum. “It was vital for us to achieve lasting peace and stability in Mindanao so that those affected by the tensions could get their lives back, so that they could hold steady jobs, so that businesses—both big and small—could focus on efficiency and innovation instead of just worrying for their safety.” Reports from Germelina Lacorte, Judy Quiros, Dennis Jay Santos and Julie S. Alipala, Inquirer Mindanao