Obama has ‘no patience’ with foreign anti-gay laws 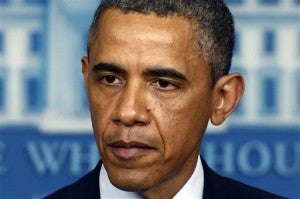 WASHINGTON – US President Barack Obama on Tuesday said he had “no patience” with foreign laws discriminating against homosexuals after Russia passed a measure punishing gay “propaganda.”

“Whether you are discriminating on the basis of race, religion, gender or sexual orientation, you are violating the basic morality that I think should transcend every country,” Obama said when asked about the Russian law on a late-night comedy show.

“I have no patience for countries that try to treat gays or lesbians or transgender persons in ways that intimidate them or are harmful to them,” he added, noting that Russia “is not unique” in passing such laws.

He referred to countries in Africa, without naming any specifically, that were also “in some ways persecuting the gays and lesbians.”

Uganda has famously proposed a measure that called for the death penalty for “aggravated homosexuality,” though the bill has never become law.

“But one of the things that I think is very important for me to speak out on is making sure that people are treated fairly and justly.”

The Russian measure, signed into law by President Vladimir Putin, introduces fines of up to 5,000 rubles ($156) for citizens who disseminate information about homosexuality to minors, but critics fear it could legitimize far-reaching discrimination.

The bill has sparked controversy ahead of the 2014 Olympic Games in Sochi and raised concerns that visiting gay athletes and spectators could face discrimination or even legal action.

Obama downplayed such fears, saying it was in the best interests of Putin and Russia to “make sure the Olympics work.”

“I think they understand that for most of the countries to participate in the Olympics, we wouldn’t tolerate gays and lesbians being treated differently,” Obama said.

“They’re athletes. They’re there to compete. If Russia wants to uphold the Olympic spirit, then every judgment should be made on the track or in the swimming pool or on the balance beams.

“People’s sexual orientation shouldn’t have anything to do with it.