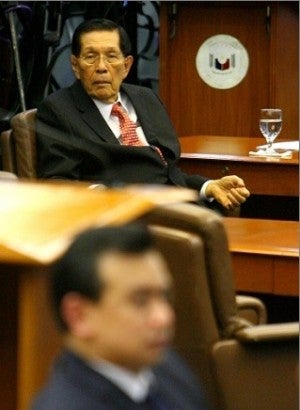 Senate President Juan Ponce Enrile and Senator Antonio Trillanes at the session hall during the regular session at the Senate in Pasay City. PHOTO BY RICHARD A. REYES

MANILA, Philippines—Senator  Antonio  “Sonny” Trillanes IV and  Senate Minority Leader Juan Ponce-Enrile, who have been at odds with each  other, came face to face  again on Tuesday over the issue of the alleged passing  of the corporate income taxes of two water concessionaires to their consumers.

This started when Trillanes took the floor and pressed for the review and investigation of the reported pass-on charges to the consumers by the Manila Water Company, Inc. and Maynilad Water Services.

In his speech, Trillanes said there was an “urgent and imperative” need to conduct an investigation into the issue “not only in order to enact remedial legislation” but also to clarify whether or not the two water concessionaires were “acting within the bounds of the law and their respective concession agreements with the MWSS.”

“Like most of our constituents here in Metro Manila we too are consumers and clients of Maynila and Manila Water and for my part, I would like to know and be clarified whether or not the water concessionaires’ act of passing on to us the subject expenses is legal, reasonable and/or proper,” he said.

But Enrile questioned the authority of Congress to look into the concession agreements between the water concessionaires and the MWSS.

Before firing his questions, Enrile greeted Trillanes, who is celebrating his birthday this Tuesday.

The opposition leader then went and asked Trillanes who holds the legislative franchise to distribute water in Metro Manila.

“I think that question is quiet off from the main topic of the privilege speech. This is about the passing on of the corporate income taxes to the consumers. It’s not a question of who holds what franchise,” said Trillanes.

But Enrile pressed for answers, noting where the two concessionaires draw their authorities when they are not franchise holders.

“Once again, I will have to insist that that question is neither here nor there because the issue beforehand is whether they are authorized   to pass on to the consumers the corporate  income taxes,” said Trillanes.

Enrile said he was asking the questions because he wanted to know whether the franchise of MWSS allows it to enter into a contract with these two concessionaires, “providing a provision in their contract that they can pass on their income tax to the water consumers.”

Trillanes again dismissed Enrile’s question, saying it was “totally irrelevant” to the topic.

“What this representation is asking for is an inquiry … Can we at least give this Senate inquiry a chance?” he said.

“If I’m not a member of Congress and prohibited from practicing law and I handle this case, I will win it against you in the courtroom,” said Enrile.

“What can we do in Congress? Can we change the terms and conditions of the contract of MWSS with the concessionaires?” he asked, adding that Congress was “powerless” to intervene on contractual agreements.

Enrile ended the exchange by just wishing Trillanes “good luck” in his efforts to push for Senate inquiry on the issue.