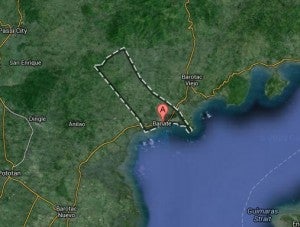 ILOILO CITY, Philippines– An elderly woman drowned while a girl was bitten by a snake after flooding hit several villages of Banate town in Iloilo Monday.

Monita Pabilona, 80, drowned when flood waters rushed into her house in Barangay (village) De La Paz in Banate midnight Monday, according to a report of the Office of Civil Defense in Western Visayas.

The floodwaters, more than a foot high, affected 475 families or 2,375 persons in 12 villages.

The floods also damaged infrastructure worth P46 million and 1,729 hectares of rice lands with crops in various stages of growth, according to the report.

On Sunday, hundreds of residents of Iloilo City were evacuated after flooding hit several villages also due to continued heavy rains.

The Iloilo City Social Welfare and Development Office reported that 135 families or about 675 persons temporary left their homes starting Sunday morning as water levels rose in their communities.

The evacuees were residents of Barangays Sooc, Calubihan, Calajunan and Bakhaw. No casualties were reported, according to Mario Mahinay, CSWDO supervising administrative officer.

Flooding affected at least 998 families or around 4,990 persons.

The city’s evacuees took shelter in barangay halls and daycare centers. Most of them returned to their homes late Sunday except for nine families from Sooc who were only able to return home late Monday morning, Mahinay said.