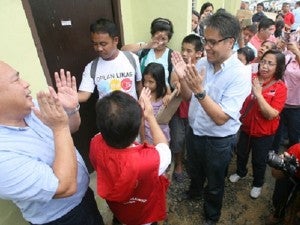 SAN JOSE DEL MONTE CITY, Philippines—Tricycle driver Manuel Bilog looks forward to waking up every morning without the stress that came with his family’s old life in the slums of Pinaglabanan in San Juan City in Metro Manila.

He and his neighbors at Phase 1 of San Jose del Monte Heights Subdivision in Barangay (village) Muzon here now have houses and lots that they can call their own. Like him, his neighbors used to live in shacks in different parts of Metro Manila.

Bilog, 50, and his family were among the first to relocate here after a fire razed a slum area in San Juan in December last year.

It’s hardly an ideal place to live in—yet. Bilog and his neighbors get electricity by paying P20 daily to run the community’s power generator set. They also shell out P40 for a drum of water for household needs.

“It’s better here. When you wake up, you don’t feel the weight of the world. It’s a real community,” Bilog said.

“That’s because we came from a squatter colony. We were squatters. But here, we own our home lots and we no longer feel oppressed,” he said.

The government hopes other informal settlers relocating to Phase 2 of the subdivision from San Juan City in Metro Manila will have the same experience as Bilog’s.

On Monday, 87 of those families set foot on their new community atop a hill, brought there in service vehicles provided by their former village in San Juan. A truck carrying their belongings trailed the settlers.

Marilou Talisic, 37, was the first to be awarded a key to her new home, designated on paper as Block 13, Lot 12. The facade of her concrete house is painted avocado green, but the interior remains unpainted. It has a high ceiling and a loft. Each house has a toilet. A pocket garden thrives outside.

Officials of the National Housing Authority (NHA) said residents would have to spend if they wanted to improve their houses and build a second floor.

But Talisic said she and her two children were too excited to be bothered by the spartan simplicity of their new house.

She said they arrived with no ready furniture, having lived with her parents in a room in the slums. Her television set, clothes and kitchen utensils were stuffed in sacks.

Talisic said her bag carried only her marriage license and her children’s birth certificates.

She also brought the linoleum sheet that used to cover the floor of their San Juan shack, believing it would serve them well in their new home.

The NHA began developing San Jose del Monte City Heights in October 2010 as a resettlement area for Metro Manila slum dwellers. Almost half of the subdivision’s 4,600 houses have been completed.

Each family is entitled to a 40-square-meter lot, with a floor area of 22 sqm, said Rico Abueva, NHA principal engineer.

On Sunday, Manila Electric Co. (Meralco) began setting up power lines for the community, which has relied on three power generators since 2012.

The residents strive to improve their lot.

Bilog said he bought a tricycle believing it would be in great demand for commuters.

Commuters pay P10 for transport from Phase 1 to the subdivision’s gates, a kilometer-long trip. They pay another P8 for a jeepney ride to the city proper.

Nilda Baloncio, 37, who is also relocating to Phase 2, said her family would have to adjust because her husband would remain in San Juan where he worked as a tricycle driver. The other members of the family would stay here.

Baloncio said her daughter, a senior at Polytechnic University of the Philippines in Manila, would need about P150 in daily transportation allowance.

Julieth Teodoro, a resident of Phase 1, said authorities were constructing a two-story elementary school building, which would be ready for next year’s school term.

Nunag said her husband was hurt when informal settlers clashed with demolition teams, but her new home offered her a chance to open a small community store.

She is also tasked to collect the neighborhood’s daily fees for operating the power generators and for securing water. She said her family wanted to start a computer shop, but Meralco might start distributing power in their community only by December, setting back her plans.

“Apart from that we have no problems here. My mother is here with me now,” Nunag said.

Many Phase 1 residents have been recruited as work crews by the NHA to finish the houses in Phase 2.

Abueva said the government would relocate more than 900 families within the month.

Bulacan Gov. Wilhelmino Sy-Alvarado said the provincial government would ensure that the residents who relocated in the province would be safe as they follow zoning and land use plans.

“We removed them from the path of floods in Metro Manila. We will experience the same problem here if we relocate them in danger zones where the settlements could clog our waterways,” he said.

San Jose del Monte City Mayor Reynaldo San Pedro said his constituents of 700,000 people were former Metro Manila residents who were relocated in the 1970s and 1980s. It would be easy for the new arrivals to consider the city their new home, he said.