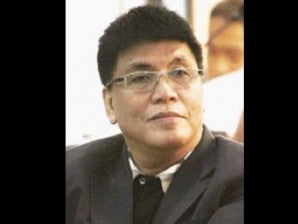 MANILA, Philippines—Former Surigao del Sur Rep. Prospero Pichay on Monday dismissed allegations that his company, Asia Prime Energy Development Corp., was a cover for an alleged scam cooked up by Janet Lim-Napoles to fleece the government of P10 billion in ghost projects using funds of lawmakers’ pork barrel and other state agencies.

Pichay, who has been dismissed from a plum government post and perpetually disqualified from public office, said his company was legitimate.

He expressed surprise that his company was even mentioned in connection with the allegations against Napoles and her alleged racket involving the Priority Development Assistance Fund (PDAF), or pork barrel, of lawmakers.

It could be a case of “malicious reporting,” he added.

Pichay was sacked as chair of the Local Water Utilities Administration in 2011 after administrative and criminal charges were filed against him for allegedly putting some P780 million in office funds into an insolvent bank in 2008 and 2009.

In an interview with ANC television, Napoles denied any wrongdoing and said her great wealth came from a successful business in coal exports and trading with China, India and Pakistan.

But Merlina P. Suñas, a Napoles employee, told the Inquirer that she registered with the Securities and Exchange Commission (SEC), Asia Prime and other dummy nongovernment organizations controlled by the businesswoman.

“They do not know anything about coal,” Suñas said. “Their goal was to go into a high-profile business from the money they made out of their real business.”

Pichay acknowledged that former Marine Maj. Jaime Napoles, Janet’s husband, was one of the stockholders in Asia Prime. He said he had known the Napoles couple for a long time, even before he entered politics. He does not think they have anything to do with the alleged scam.

According to Pichay, Asia Prime was a new company, and was only registered with the SEC recently, sometime last year. It has not yet embarked on actual projects, but it has some of them online. It has yet to put up its office, because it has yet to secure a mayor’s permit.

“It’s a start-up company,” he said. “We just organized, we registered with the SEC. How can you say it’s bogus?”

He explained that he put up the company because of the power shortage in Mindanao.

“Being a Mindanaoan, one of my advocacies is to be able to put in additional generation in Mindanao,” Pichay said.

Pichay said he and his partners were studying whether to go for a coal-fired plant, which could be controversial because of opposition from environment groups. Another alternative is a hydro-electric plant, but this could be inadequate during the summer season, he said.

He also said that the Napoleses had legitimate businesses from way back, and were involved in coal mining in Indonesia. He was also surprised when their names were dragged into the alleged misuse of the pork barrel, and did not think they could have anything to do with it.

“I was congressman for nine years. Never did she approach me about my PDAF,” said Pichay. He said he was not aware of any NGO the couple had put up.