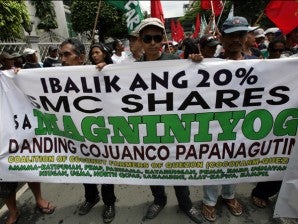 “Small coconut farmers will fight tooth and nail to frustrate Aquino’s plan to dip his hands (into) the coco levy fund,” said KMP deputy secretary  general Willy Marbella in a statement on Sunday.

Marbella claimed that under the proposed P2.3-billion budget of the  Philippine Coconut Authority for next year, P305 million has been allocated for the establishment of so-called “agro-industrial hubs” in  five coconut-producing regions to the tune of P61 million in each region.

Marbella reminded President Aquino and Alcala that the government was “only a trustee” of the multibillion-peso coco levy fund and using it to create agro-industrial hubs would go against the intent of the Supreme Court’s decision “to render social justice to small coconut farmers.”

The fund, estimated to be around P70 billion, was forcibly exacted from the small coco farmers during the Marcos regime,” he said.

“It is totally revolting that P305 million of small coconut farmers’ money will be spent for the so-called agro-industrial estate project that will only benefit big local and foreign agri-businesses,” Marbella said.

Marbella recalled that in June, Alcala disclosed that the Department of Agriculture was in talks with foreign investors for the construction of five small agri-industrial facilities and two large agri-industrial estates. He had earlier mentioned that financing for the estates could come from the coco levy fund.

Marbella said it appeared that the Aquino government—like the Marcos government in the past—would use the levy to provide the infrastructure “for the benefit of big players in the coconut industry at the expense of small coconut farmers.”

KMP has proposed the establishment of a “Small Coconut Farmers’ Council” that would manage the coco fund. They want cash and other social benefits, including but not limited to pension benefits, medical and hospitalization benefits, maternity benefits and educational assistance.

Alcala has opposed the cash distribution of the coco levy fund and suggested that it be used to rehabilitate and modernize the industry and support research and development.