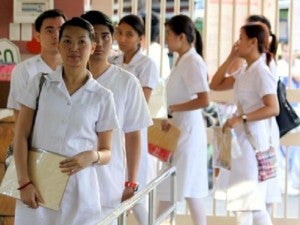 THE DEPARTMENT of Health (DOH) plans to hire as regular employees the thousands of unemployed nurses it sends to the countryside annually, Health Secretary Enrique Ona said Sunday.

Ona said the government would also double the salaries of the nurses deployed under the RN Heals (Registered Nurses for Health Enhancement and Local Service Project) program once they become regular government employees.

“That is what we are proposing—that by next year we will regularize them. They will no longer be known as RN Heals. We will also double their salary to P22,000,” Ona said in an interview.

He said that with the billions of pesos PhilHealth will be pumping into the health care system across the country, local government units would also be able to hire their own nurses within the next two years.

The DOH started the RN Heals program in 2011 after it was found that around 200,000 nurses in the country were unemployed.

The project was aimed at improving the access of the poor to quality health care by creating a pool of registered nurses with enhanced clinical and preventive health management competencies that would also increase the nurses’ employability.

The nurses, however, were not considered regular employees but “pre-service trainees” who were given allowances and not salaries.—Philip C. Tubeza