Relocation of estero families on 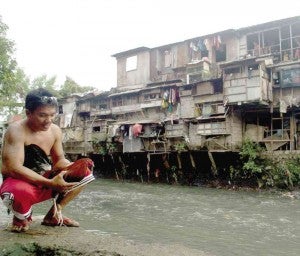 RELOCATION DAY Government agencies will be relocating informal settlers living along eight clogged waterways in Metro Manila starting Monday. First to go are those living along the river in Barangay Salapan in San Juan City who will be moved to their new homes in Bulacan. ARNOLD ALMACEN

Soon, having “Manggahan Floodway” as a residential address in Metro Manila will be a thing of the past as the clearing of squatter colonies choking Metro Manila’s waterways finally begins Monday.

The relocation is part of the P351-billion program of the Aquino administration to address flooding in the metropolis, which in recent years has worsened due to clogged waterways, urban sprawl, denuded watersheds and fiercer storms.

The first batch of informal settler families, exactly 606, will voluntarily dismantle their dwellings along the San Juan River in Barangay (village) Salapan, San Juan City, so they can relocate to new homes in San Jose del Monte City in Bulacan.

“The previous administration tolerated that one’s residence could be a floodway. In the address itself, it’s already obvious they are illegal settlers,” Interior Secretary Mar Roxas said in a dinner with the Inquirer reporters and editors on Thursday.

Roxas is spearheading the interagency collaboration among the Department of the Interior and Local Government (DILG), Department of Social Welfare and Development (DSWD), Department of Public Works and Highways (DPWH) and the Metropolitan Manila Development Authority (MMDA) to lead the clearing of waterways in the metropolis on orders of President Aquino.

The agencies begin the relocation of informal settlers along the San Juan and Tullahan rivers, which the government considers priority areas. The San Juan River is a major tributary of the Pasig River.

After the 606 families from San Juan are relocated, 871 more at the Quezon City-side of the San Juan River will immediately follow.

San Juan and Tullahan are among the eight critical areas identified by the DPWH that need to be “widened, deepened” and surrounded by a retaining wall, Roxas said.

Roxas said more than 104,000 families were occupying areas identified by the government as danger zones, such as railroad tracks, dumps, canals, rivers and creeks. Of these, some 60,000 families are occupying the eight waterways.

Roxas likened the eight waterways, which include the Pasig River, Maricaban Creek, Manggahan Floodway, Estero Tripa de Gallina, Estero de Maypajo and Estero de Sunog Apog, to veins in one’s heart that, if not unclogged, could trigger a heart attack.

Rainwater from Sierra Madre normally goes into these waterways and flows into Laguna de Bay and Manila Bay but often floods communities along the waterways if the exit points are overflowing.

“The flood management master plan (of the DPWH) will not work if informal settler families will not be removed from the waterways,” Roxas said.

The plan is to move 20,000 families in 12 months from the 3-meter easement abutting the waterways. By the end of Aquino’s term in 2016, all those choking the waterways will be gone, he said.

“The point is, we know that annually, 19 or 20 typhoons hit the country. We know that flooding is going to happen. Thus, it is a criminal negligence if we don’t do something about it,” Roxas said.

For this year, the DSWD and the MMDA have identified 19,440 families to be moved out of the eight critical areas in the next 12 months.

Giving the informal settler families new homes will cost the government P10 billion, which is in addition to the P351 billion for the flood-control infrastructure that the DPWH and the MMDA will build.

Roxas said the relocation would be done “segment by segment” to make the systems manageable and measurable “rather than moving thousands but not moving forward.”

“After 100 meters have been cleared, the DPWH and MMDA come in to dredge and put up retaining walls. Then we will work on the next 100 meters,” he said.

Asked about the possibility of violence erupting in squatter communities, Soliman said the social preparations, including dialogues and tours at the resettlement sites, had made sure that resistance from the relocatees and urban poor groups would be prevented.

“They were given options. They were offered relocation off-site, near-site and on-site, and these are explained to them very well,” she said.

Roxas said the informal settler families were offered amortization rates of as low as P200 for their new houses in the resettlement areas and an P18,000 subsidy for those who were still waiting for relocation.

He said the amortization would depend on the place of relocation, with on-site resettlement areas commanding higher rates.

The families also have the option of setting up organized communities to build medium-rise housings, which will be financed by Social Housing Finance Corp.

The first batch underwent the biometrics listing initiated by the DSWD to prevent “professional squatters” from taking advantage of the government’s financial aid.

Soliman said the government had made arrangements with schools near the relocation site in San Jose del Monte to accommodate displaced students.

Officials expect the execution of the program not to be that easy.

Cruz said of those whom the government social workers had talked to, 80 percent signified their willingness to be relocated. “We expect opposition from the 10 to 20 percent,” Cruz said.

Roxas said clearing the waterways was covered by existing laws.

Section 28 of Republic Act No. 7279, or the Urban Development and Housing Act of 1992, allows “eviction or demolition… when persons or entities occupy danger areas such as esteros, railroad tracks, garbage dumps, riverbanks, shorelines, waterways and other public places, such as sidewalks, roads, parks and playgrounds.”

A more recent law, RA 10121, or the Philippine Disaster Risk Reduction and Management Act of 2010, says the state should “uphold the people’s constitutional rights to life and property by addressing the root causes of vulnerabilities to disasters,” Roxas said.

The law also said the government should strengthen “the country’s institutional capacity for disaster risk reduction and management, and building the resilience of local communities to disasters, including climate change impact.”

Roxas noted that the country was losing billions of pesos to the perennial floods in the capital and that the poor were feeling the full brunt of the disaster.

A study has found that students in 813 public schools in flood-prone areas missed 10 percent of the number of school days every year due to flooding, he said.

Roxas said the government plan to clear the waterways of illegal settlers was finalized even before the death of then Interior Secretary Jesse Robredo in August last year.

During a conversation they had in January, Roxas recalled Aquino telling him that he had been gravely affected by the number of deaths in the recent storms that hit the country. 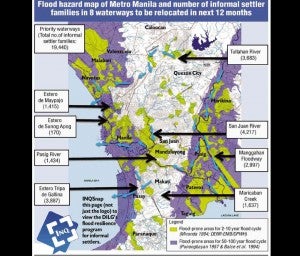 “He told me thousands had died in the past two Christmases. It was because of [Tropical Storm] ‘Sendong,’ Typhoon ‘Pablo’ and habagat (monsoon). He said the government would look inutile if we cannot act to prevent similar events from happening,” Roxas said.

“That’s why we’re committed in putting all agencies together and come up with a good plan so that we can say that we’ve done something and not just let nature decide our fate,” he added.

As early as 8 a.m. Monday, representatives of the national government and the local government of San Juan will go to the small barangay of Salapan to oversee the dismantling of houses of informal settlers in the area.

Salapan is the northernmost barangay of San Juan. With an area of 17.73 hectares, it is bounded by two waterways: the San Juan River to the west and the Ermitaño Creek to the north and east.

Roxas, Cruz, MMDA ChairmN Francis Tolentino and San Juan Mayor Guia Gomez will oversee the dismantling of houses and other structures along the 3-meter easement of the two rivers.

The interior secretary will also travel with them to their new home in San Jose del Monte. “These families have agreed to voluntarily move to the relocation site. They have been the most socially prepared for this,” Roxas said.

An initial 87 houses in the barangay, mostly between the Ermitaño Creek and A. Luna Street, will be dismantled today.

The city government said the affected residents would be relocated to a settlement in Barangay Muzon in Bulacan.

Data from the city government show that a total of 1,150 families live along waterways in San Juan.