MAKE INVISIBLE VISIBLE Actor Liam Neeson as UNICEF Goodwill Ambassador appears in a video campaigning against violence on children. The video was produced alongside a UNICEF announcement urging people to speak out more forcefully against this social malaise. Protecting children is at the heart of UNICEF’s mandate. The United Nations Convention on the Rights of the Child specifies that every child everywhere has the right to be protected from all forms of violence. UNICEF VIDEO

The initiative builds on growing popular outrage that erupted following horrific attacks against children, such as the October 2012 shooting of then 14-year-old Malala Yousafzai in Pakistan, the fatal shooting of 26 pupils and teachers in Newtown, Connecticut, in December 2012 and gang rapes of girls in India and in South Africa in 2013.

“In every country, in every culture, there is violence against children,” said UNICEF Executive Director Anthony Lake. “Whenever and wherever children are harmed, our outrage and anger must be seen and heard. We must make the invisible visible.”

This is the underlying message as UNICEF launched the End Violence Against Children initiative that urged people around the world to recognize violence against children, join global, national or local movements to end it and bring together new ideas to focus collective action on this goal. “We have the power to fight violence now,” said UNICEF, bringing its global voice to add to the many efforts already underway.

The initiative was unveiled with a powerful video narrated by UNICEF Goodwill Ambassador Liam Neeson, who leads the viewer through a series of scenes depicting invisible violence. 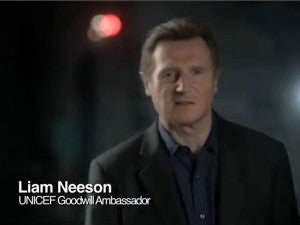 “This is a 15-year-old girl being gang raped,” he says as the camera pans across an abandoned lot. “This teacher is beating a boy for talking back in class, while the rest of the class watches,” he says as new scenes unfold.

The need to take urgent collective action is underlined even by the limited statistics available, which point to the scale and extent of violence. For example, some 150 million girls and 73 million boys under 18 years experienced sexual violence and exploitation, according to the WHO, and an estimated 1.2 million children are trafficked every year, according to a 2005 ILO report.

Violence inflicts not only physical wounds but leaves mental scars on children. It affects their physical and mental health, compromises their ability to learn and socialize and undermines their development.

In the Philippines, we are working with government and partners to collect evidence on the prevalence and pervasiveness of violence against children, with a particular focus on sexual violence. We will use the findings to develop programmes and approaches to address the underlying drivers of sexual violence against children and improve the support to survivors,” said Mr. Abdul Alim, OIC/Deputy Representative UNICEF Philippines.

A special microsite and a social media campaign outlines ways for children, parents and communities to take action – such as getting involved, getting informed, organizing events and public discussion forums, supporting child victims of violence and working with global and local UNICEF partners.

Protecting children is at the heart of UNICEF’s mandate. The United Nations Convention on the Rights of the Child specifies that every child everywhere has the right to be protected from all forms of violence.

Read Next
Iloilo City without power for 5 hours as blackout hits Panay
EDITORS' PICK
PH preps for China virus: Question of when, not if
Beyond water service: Maynilad builds massive infrastructure projects to clean up Metro Manila waterways
Museums ‘put to sleep,’ churches closed amid volcano’s unrest
Seventh judge assigned to handle De Lima case
SM continues to send relief assistance to remote towns in Batangas
Get exciting deals and discounts when you download the new McDonald’s App
MOST READ
Taal Volcano flexes signs of restiveness anew
Part of Aurora Boulevard in Cubao closed from Jan. 25 – Feb. 1
Passengers from Wuhan, China to be flown out of Kalibo, Aklan – CAAP
Lacson on Duterte’s threat to end VFA over Bato’s canceled visa: Where is the connection?
Don't miss out on the latest news and information.