A future for nurses | Inquirer News

A future for nurses 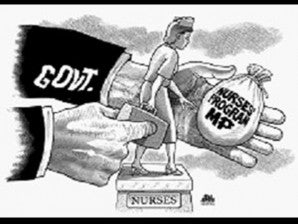 In the United States,  four Filipino-American nurses won their discrimination case against a Maryland-based hospital that fired them for speaking in Tagalog.

On the home front, a total of 37,513 nursing graduates passed the board examinations and earned their professional licenses.

The commission said the nurses were subjected   to “unequal terms and conditions of employment, a hostile work environment, disciplinary action and discharge because of their national origin. It ordered the hospital to discuss a financial settlement with the health workers that may include a demand for an apology and diversity training for management and staff.

The four Filipino nurses who filed their case in June 2010 were just some of many who sued  their American employers for workplace discrimination.

This shows that life for Filipino nurses won’t necessarily be smooth-sailing even if they obtain employment in so-called greener pastures overseas.

Which is why we congratulate and say “Take heart” to the latest batch of registered Filipino nurses, who earned their RN status when many hospitals in the US and elsewhere in the world have imposed a hiring freeze amid fears of yet another global economic recession.

To be employed in a foreign hospital—and we have to speak of this goal since President Benigno Aquino III’s government has yet to fulfill his inauguration day pledge  “to create jobs at home so that there will be no need to look for employment abroad”—nurses need to earn their spurs by practicing their profession for at least two years in a domestic hospital.

They shouldn’t have to suffer  betrayal by their own in greedy hospitals that brazenly extort money from them in exchange for volunteer work that many foreign hospitals no longer credit as experience anyway.

The Department of Health should run after these opportunistic health care institutions.

In the meantime, may we interest the State    in creating jobs for nurses in many of our poorly-run—because understaffed—public hospitals? That would go a long way to saving our nurses from the dis-ease of working at the wrong jobs—as in call centers, many of which are closing doors on nurses—instead of comforting  the ailing.

In Cebu City, Mayor Michael Rama and the City Council would do well to approve the P600-million 2012 Cebu City Medical Center budget that  Dr. Eduardo Sedoripa proposed before he resigned as hospital chief. At least P200 million is allocated to hire  more nurses and doctors and adjust the salaries of existing personnel.

If we could retain  nurses like the recent board top-notchers from Cebu Normal University, Velez College, Cebu Doctors’ University and STI College Cebu, imagine the wonders we’d see in our public health system.