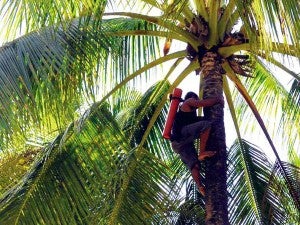 LEYTE—“Tuba,” the bittersweet traditional wine of the Waray, has leveled up and is ready for export.

A native of Leyte who retired from work in the United States put up a coconut wine production plant in Marasbaras District in Tacloban City in 2010 and came out with his premium coconut wine called Vino de Coco.

George Vacal Paraliza, 67, said he would not spend his life savings if he didn’t believe that his business would be a success.

“It’s also about time that our [tuba] product should be known outside the country,” Paraliza said.

So far, some businessmen from Singapore and India have shown interest in becoming distributors of Vino de  Coco.

About five years ago, there were efforts to improve the native wine to make it taste better and sell it in presentable bottles. But these fizzled out for unknown reasons.

In 2010, a new brand of bottled tuba found its way to  the local market in the region and then to other parts of the country. Lately, businessmen from China, India and Singapore have shown interest in the native wine.

Paraliza set up his plant in an old warehouse in  Tacloban in 2010. By late November that year, he started producing  Vino de  Coco.

“I have many fresh tuba suppliers. Their problem is that they are dependent on fiestas when the demand for tuba goes high,” Paraliza said.

Suppliers now have him as a ready market. “I want them to deliver only very fresh tuba,” Paraliza said. The coconut sap must not be over 12 hours old, he pointed out.

The tuba plant can produce 1,875 cases of 750-milliliter wine every month. A case contains 12 long-neck bottles. 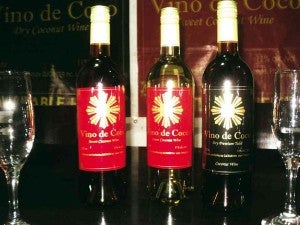 Paraliza said he had yet to reach full production.

Wine-making is not new to the entrepreneur. “While in the States, I had a hobby of home wine-making. I can make wine from almost anything,” he said.

While working in the United States, Paraliza regularly visited Leyte, where he tasted the native wine again. It still had the same taste  so he vowed to make it better.

Paraliza, 67, was born in La Paz, Leyte, and moved to Cebu City where he continued his studies. His mother, a nurse, migrated to the United States. In 1967, he was petitioned by his mother.

In Guam, where he stayed for some time, he met his wife Tila, who is from San Antonio, Texas. They have eight children, 21 grandchildren and two great grandchildren.

Paraliza relocated to Leyte following his retirement in 2005.

He said he was nurturing other plans for his business, including making tuba in beer-size containers.

“We will try to compete with beer,” he said.

The price of beer is bound to increase with the implementation of the sin tax, Paraliza said. Tuba, a traditional wine, is exempted from the tax, he added.