Most wanted face of terrorism

THE MOST intense manhunt in history finally caught up with Osama bin Laden, but his life’s story will be told many different ways by different people.

Reviled in the West as the personification of evil, Bin Laden was admired and even revered by some fellow Muslims who embraced his vision of unending jihad against the United States and Arab governments he deemed as infidels. 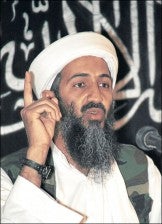 Bin Laden’s money and preaching inspired the Sept. 11, 2001, terrorist attacks that killed some 3,000 people in New York, Washington and Pennsylvania, and forever ripped a hole in America’s feeling of security in the world.

His actions set off a chain of events that led the United States into wars in Afghanistan, and then Iraq, and a clandestine war against extreme Islamic adherents that touched scores of countries on every continent but Antarctica. America’s entire intelligence apparatus was overhauled to counter the threat of more terror attacks at home.

Bin Laden was killed in an operation led by the United States, President Barack Obama said Sunday. A small team of Americans carried out the attack and took custody of Bin Laden’s remains, Obama said.

Bin Laden’s al-Qaida organization has also been blamed for the 1998 bombings of two US embassies in Africa that killed 231 people and the 2000 attack on the USS Cole that killed 17 American sailors in Yemen, as well as countless other plots, some successful and some foiled.

Perhaps as significant was his ability—even from hiding—to inspire a new generation of terrorists to murder in his name. Most of al-Qaida’s top lieutenants have been killed or captured in the years since Sept. 11, 2001, and intelligence officials in Europe and Asia say they now see a greater threat from home-grown radical groups energized by Bin Laden’s cause.

Bin Laden was born in Saudi Arabia in 1954. He became known as the most pious of the sons among his wealthy father’s 54 children. Bin Laden’s path to militant Islam began as a teenager in the 1970s when he got caught up in the fundamentalist movement then sweeping Saudi Arabia. He was a voracious reader of Islamic literature and listened to weekly sermons in the holy city of Mecca.

Thin, bearded and over 6-feet tall, Bin Laden joined the Afghans’ war against invading Soviet troops in the 1980s and gained a reputation as a courageous and resourceful commander. Access to his family’s considerable construction fortune certainly helped raise his profile among the mujahedeen fighters.

At the time, Bin Laden’s interests converged with those of the United States, which backed the “holy war” against Soviet occupation with money and arms.

When Bin Laden returned home to Saudi Arabia, he was showered with praise and donations and was in demand as a speaker in mosques and homes. It did not take long for his aims to diverge from those of his former Western supporters.

“When we buy American goods, we are accomplices in the murder of Palestinians,” he said in one of the cassettes made of his speeches from those days.

A seminal moment in Bin Laden’s life came in 1990, when US troops landed on Saudi soil to drive Iraq out of Kuwait.

Bin Laden tried to dissuade the government from allowing non-Muslim armies into the land where the prophet Mohammad gave birth to Islam, but the Saudi leadership turned to the United States to protect its vast oil reserves. When Bin Laden continued criticizing Riyadh’s close alliance with Washington, he was stripped of Saudi citizenship.

“I saw radical changes in his personality as he changed from a calm, peaceful and gentle man interested in helping Muslims into a person who believed that he would be able to amass and command an army to liberate Kuwait. It revealed his arrogance and his haughtiness,” Prince Turki, the former Saudi intelligence chief, said in an interview with Arab News and MBC television in late 2001.

“His behavior at that time left no impression that he would become what he has become,” the prince added.

The prince, who said he met Bin Laden several times years ago in Pakistan and Saudi Arabia, described him as “a gentle, enthusiastic young man of few words who didn’t raise his voice while talking.”

Abdel-Bari Atwan, editor of Al-Quds al-Arabi, a London-based newspaper, spent 10 days with Bin Laden in an Afghan cave in 1996. He said Bin Laden “touched the root of the grievances of millions in the Arab world” when he presented himself as the alternative to Arab regimes that have been incapable of liberating Arab land from Israeli occupation and restoring pride to their people.

He said Bin Laden and his followers never feared death.

“Those guys spoke about death the way young men talk about going to the disco,” Atwan said. “They envied those who fell in battle because they died as martyrs in God’s cause.”

Still, Bin Laden had a knack for staying alive.

After being kicked out of Saudi Arabia, Bin Laden sought refuge in Sudan. The African country acceded to a US request and offered to turn Bin Laden over to Saudi Arabia in 1996, but his native country declined, afraid a trial would destabilize the country.

Back on familiar terrain in Afghanistan—allowed in by the government of Burhanuddin Rabbani—Bin Laden and his al-Qaida network prepared for the holy war that turned him into Washington’s No. 1 enemy.

When the Taliban—who would eventually give him refuge—first took control of Kabul in September 1996, Bin Laden and his Arab followers kept a low profile, uncertain of their welcome under the new regime. The Taliban leader Mullah Mohammed Omar called Bin Laden to southern Kandahar from his headquarters in Tora Bora and eventually through large and continual financial contributions to the isolated Taliban, Bin Laden became dependent on the religious militia for his survival.

In Afghanistan, he would wake before dawn for prayers, then eat a simple breakfast of cheese and bread. He closely monitored world affairs. Almost daily, he and his men—Egyptians, Yemenis, Saudis, among others—practiced attacks, hurling explosives at targets and shooting at imaginary enemies.

He also went horseback riding, his favorite hobby, and enjoyed playing traditional healer, often prescribing honey, his favorite food, and herbs to treat colds and other illnesses. In Afghanistan, Bin Laden was often accompanied by his four wives—the maximum Islam allows. Estimates on the number of his children range up to 23.

Al-Qaida’s first major strike after Bin Laden returned to Afghanistan was on Aug. 7, 1998, when twin explosions rocked US embassies in Kenya and Tanzania. Most of the victims were African passers-by, but the bombings also killed 12 Americans.

Days later, Bin Laden escaped a cruise missile strike on one of his training camps in Afghanistan launched by the United States in retaliation. Bin Laden is believed to have been at the Zhawar Kili Al-Badr camp for a meeting with several of his top men, but left shortly before some 70 Tomahawk cruise missiles slammed into the dusty complex.

Since Sept. 11, Bin Laden stayed a step ahead of the dragnet—perhaps the largest in history for a single individual.

As the Taliban quickly fell under pressure of the US bombardment, Bin Laden fled into the inhospitable mountains in the seam that separates Pakistan and Afghanistan, keeping up a spotty stream of chatter—first in video tapes and then in scratchy audio recordings—to warn his Western pursuers of more bloodshed.

Just hours after the US assault on Afghanistan began on Oct. 7, 2001, Bin Laden appeared in a video delivered to Al-Jazeera, an Arab satellite television station, to issue a threat to America.

“I swear by God … neither America nor the people who live in it will dream of security before we live it in Palestine, and not before all the infidel armies leave the land of Mohammad, peace be upon him,” said Bin Laden, dressed in fatigues.

‘America can’t get me alive’

He reappeared in a video appearance broadcast by Al-Jazeera on Dec. 27, 2001, shortly after US forces apparently had him cornered in Tora Bora, a giant cave complex in eastern Afghanistan. Hundreds of al-Qaida suspects are believed to have escaped the massive US bombing campaign there, and Bin Laden is believed to have been among them.

During the past decade, Bin Laden and deputy Ayman al-Zawahri have appeared regularly in audio and video tapes to issue threats, and comment on a wide range of current events, although the appearances trailed off in recent years.

At several points in the years since the Sept. 11 attacks, Bin Laden’s capture or death had appeared imminent. After the March 2003 arrest of Khalid Shaikh Mohammed, the alleged mastermind of the Sept. 11 attacks, officials in Islamabad and Washington were paraded out to deny a consistent stream of rumors that Bin Laden had been captured.

Through it all, Bin Laden vowed repeatedly that he was willing to die in his fight to drive the Israelis from Jerusalem and Americans from Saudi Arabia and Iraq.

“America can’t get me alive,” Bin Laden was quoted as saying in an interview with a Pakistani journalist conducted shortly after the US invasion of Afghanistan. “I can be eliminated, but not my mission.”