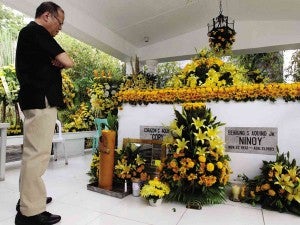 President Aquino prays at the grave of his parents during the concelebrated Mass to commemorate the fourth death anniversary of his mother and democracy icon, former President Corazon C. Aquino, at Manila Memorial Park in Sucat, Parañaque City. MALACAÑANG PHOTO

(Editor’s Note: INQUIRER.net is reposting the article by the Philippine Daily Inquirer with some corrections and additional details.)

Father Manoling Francisco, the Jesuit composer, drew parallels between the lives of the late democracy icon Corazon C. Aquino and Pope Francis of the Catholic Church in his homily at the Manila Memorial Park Thursday afternoon.

“We remember Tita Cory for her austerity and simplicity. And she shares these virtues with our Blessed Pope,” said Francisco as the former president’s family, friends and colleagues gathered at her tomb to mark her fourth death anniversary.

Francisco, who concelebrated the Mass with Fathers Catalino Arevalo, Aquino’s spiritual adviser, and Arnold Abelardo, said that like Pope Francis, the late president had preferred a simple life and rejected the opulence of Malacañang when she chose the Arlegui Mansion for her official residence.

“It’s similar to the Pope’s decision not to stay at the Apostolic Palace, the official residence of the Pope, and instead live with the other clergy in the Domus Sta. Martha building,” said Francisco whose musical play “Pamana” about the Aquino legacy will be presented on August 21, the death anniversary of Aquino’s husband and martyred Senator Benigno Jr.

He recalled a time when the ailing president refused to have a Mass said in her home “because she did not want to bother other people.”

The current President Benigno Aquino III joined his sisters Ballsy Aquino-Cruz, Pinky Aquino-Abellada and Viel Aquino-Dee and their families in remembering the legacy of their mother, whose death in 2009 elicited an outpouring of public sympathy that eventually prompted then Sen. Aquino III to run for president in 2010.

Kris Aquino, the youngest daughter of the former president, is reportedly in Israel.

The president, who wore a black shirt with his trademark yellow ribbon, stood during the entire Mass, giving way to the elderly in canes.

Defense Secretary Voltaire Gazmin, who was the Philippine Army chief and head of the Presidential Security Group during Cory’s administration, also turned up at the Mass, so with Communications Office Secretary Herminio Coloma, Pangasinan Rep. Gina de Venecia and members of the first Aquino Cabinet—Carlos Dominguez (agriculture) and Jose Gonzales (tourism).

Coloma told the Philippine Daily Inquirer that the homily highlighted the personal qualities of the late leader. “She was not preoccupied with power and authority but more with concern for her fellow Filipinos,” he said.

“One of the greatest things we have learned from Corazon C. Aquino is the work that it takes to maintain and improve a working democracy. So as we celebrate the life she lived, we remain cognizant of the challenges that persist,” said presidential spokesperson Edwin Lacierda, reading the Malacañang statement at a briefing in the Palace.

“We thank Cory Aquino once more, while at the same time realizing that the truest expression of gratitude would be the continuation of her work—creating in this country a democracy that is better, stronger and even more inclusive,” he said.

“We remember the life of Mrs. Aquino. After her husband, former Senator Ninoy Aquino, was assassinated on Aug. 21, 1983, the mantle of fighting for democracy fell upon her shoulders, and she responded. In the years that followed, she became the face of the Filipino people’s struggle for freedom—a struggle that culminated with the 1986 Edsa Revolution,” said Lacierda.

He said Aquino spent her six-year term “reclaiming our national dignity, rehabilitating our country’s image in the international community and reestablishing institutions to better safeguard our democracy.”

“Even after her term ended, she continued her public service through her political activism and through her support for nonprofit organizations,” said Lacierda.

In her speech after the Mass, the former president’s daughter Pinky thanked Fr. Francisco as she recalled that every time a Mass was said on Aug. 21, her mother would always say: “If I am no longer here, please don’t do this.”

Pinky said it was the idea of Margie Juico, chair of the Philippine Charity Sweepstakes Office, and members of the Yellow Ribbon Movement to hold the private event.

“You can’t stop the people from gathering here to remember a great woman,” said Juico. “It’s our way of showing her our gratitude.”