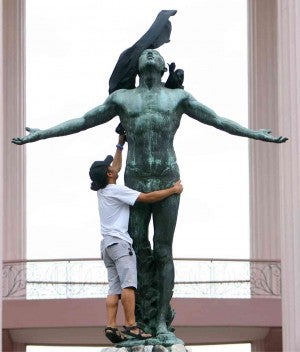 THE UP community in mourning after Tejada’s death in March

Something good has come out of the tragic death of University of the Philippines (UP) Manila student Kristel Tejada.

Nearly five months after the 16-year-old behavioral sciences freshman killed herself when her application for a loan that would have allowed her to continue her studies was denied, a lending program for needy UP Manila and Diliman students has been launched.

The UP Educational Loan Project was initiated by Arnel Paciano D. Casanova, a graduate of the state university who is now the president and chief executive officer of the state-run Bases Conversion and Development Authority.

“I had a personal experience when I was a working student then…. There is a need to address the problem of students on access to financing. When they are in need, students are driven to despair [as they suffer] from the indignities caused by poverty,” Casanova told the Inquirer in a phone interview yesterday.

“Instead of blaming other people [for Tejada’s plight], we might as well act so that UP students will have [an] opportunity to continue their studies. For many, a UP education is a way out of poverty so [deserving students] should be given that chance,” he said.

According to Casanova, he donated a “modest” amount from his own savings while the    Center for Agriculture and Rural Development Mutually Reinforcing Institutions (CARD MRI) provided a counterpart amount that would serve as the seed fund for the loan program.

The microfinance institution, which was awarded the Ramon Magsaysay Award in 2008 for public service, will be in charge of the project’s administration.

“We are looking [into] putting up an office in UP Diliman where we will pilot the student loan program. The greater vision is to replicate this project in the whole Philippines so it can have a greater impact,” he added.

At the same time, Casanova urged all UP alumni to donate a minimum of P1,000 a year to the fund so that it would grow and help as many students as possible.

He clarified, however, that the UP Educational Loan Project was “a loan program, not charity.”

“We want to empower the students so they won’t think this is just charity. They will see this as investing in their own dreams. They have to work hard for it and in a sense, it provides them a sense of dignity because they will not have to go begging,” he said.

According to Casanova, a student can borrow as much as P10,000 with a monthly interest of just one percent. The loan will be payable in one, three or six months under a weekly, semimonthly, monthly or lump sum basis.

“We don’t intend to profit so much. The interest [will be used to let the fund grow] and cover operational expenses. The one percent interest will be based on diminishing balance so that’s very easy payment terms,” he said.

To avail themselves of the loan, students should declare their place of residence.

To ensure that the family will be able to pay off the loan, the student’s parents, after undergoing a screening to be conducted by CARD MRI, will be given a production loan which could be used for “economic activities.”

On the other hand, students will be referred by CARD MRI to  corporate partners for possible hiring to ensure repayment although this will not be a prerequisite to qualify for the loan program.

Casanova said that the project would be implemented in other UP systems once it has taken off. For now, interested UP Diliman and Manila students can inquire about the program by getting in touch with Pauline Belarmino at [email protected]