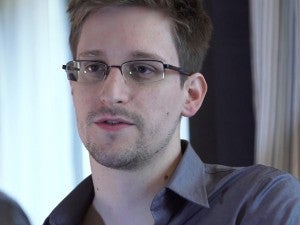 MOSCOW – Fugitive US intelligence leaker Edward Snowden has left the Moscow airport where he has been holed up for over a month, after being granted one year’s asylum in Russia, his lawyer said Thursday.

“Snowden has left Sheremetyevo airport. He has just been given a certificate that he has been awarded temporary asylum in Russia for one year,” his lawyer Anatoly Kucherena told Agence France-Presse.

An airport spokeswoman added he had left within the last two hours. A source told the Interfax news agency he had now crossed the Russian border for the first time.

Kucherena said Snowden had left in a normal taxi on his own. The lawyer added Snowden’s new place of residence would be kept secret for security reasons.

“His location is not being made public for security reasons since he is the most pursued man on the planet. He himself will decide where he will go,” Kucherena said.

Snowden, 30, is wanted on felony charges by the United States after leaking details of vast US surveillance programmes, but Russia has refused to extradite him.

Interviewed by Rossiya 24 television, Kucherena held up a scanned copy of Snowden’s certificate granting him a year’s temporary asylum in Russia.

“He has gone to a safe place. I hope you will be understanding about this information,” he told the television.

Snowden has been staying in the transit zone of the Sheremetyevo airport outside Moscow since he flew in from Hong Kong on June 23 and has never formally crossed the Russian border.

His awarding of asylum status in Russia came two days after US soldier Bradley Manning was convicted of espionage on Tuesday for leaking US secrets to anti-secrecy website WikiLeaks.

“Edward Snowden has successfully acquired refugee status in Russia and will shortly leave the airport,” WikiLeaks, which has supported Snowden, said on Twitter.

It said he was still “under the care” of WikiLeaks British staffer Sarah Harrison who flew in with him from Hong Kong and is believed to have been with him ever since.

Awarding him asylum in Russia risks a diplomatic row with the United States, which had previously described such a prospect as “deeply disappointing”.