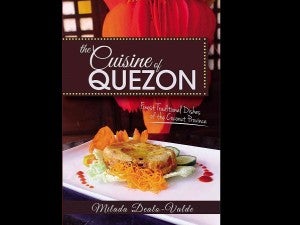 FRONT COVER of “The Cuisine of Quezon (Finest Traditional Dishes of the Coconut Province)” by Milada Dealo-Valde, a native of Lucban, Quezon LEO VARGAS/CONTRIBUTOR

The bucolic town of Lucban, Quezon, at the foot of the mystical Mt. Banahaw, has long been known for its cool breeze, colorful Pahiyas festival and, yes, native food such as “longganisa,” “pansit Lucban,” “hardinera” and “embotido.”

Just like any trade secret, the recipes behind the sumptuous dishes had been a mystery to food lovers outside of the town. A number of cookbooks on the shelves of bookstores in Metro Manila tried to fill in the information gap but failed as the authors apparently lack a deeper understanding of the history and soul of Lucban cuisine.

Not until a Lucban native, Milada Dealo-Valde, 70, dared to fulfill a longtime wish to share her town’s food treasures in a coffee-table cookbook she herself prepared and authored.

The 120-page “The Cuisine of Quezon (Finest Traditional Dishes of the Coconut Province)” features 49 meat, seafood and vegetable dishes, which Valde described as “foods that grandmothers in Quezon love to cook.” It will be formally launched on Aug. 1 at SM City Lucena.

“The dishes are 80 percent from Lucban and 20 percent are equally tempting cuisine from other parts of the province,” said Valde, who owns Dealo Koffee Klatch, a popular bakeshop known for its special “broas” (toasted lady fingers).

“I want others to continue to enjoy and savor my treasured dishes even when I’m gone,” she said in an interview.

Food, like God’s other blessings, is meant to be shared and relished in a communal feast, Valde said. By sharing, she also meant including the process—recipe and cooking instruction—behind the creation of the dish.

Valde, a former president of Quezon’s tourism council, an accountant by profession, and a baker by occupation, was able to taste and enjoy the most popular food specialties in almost every town in the province. 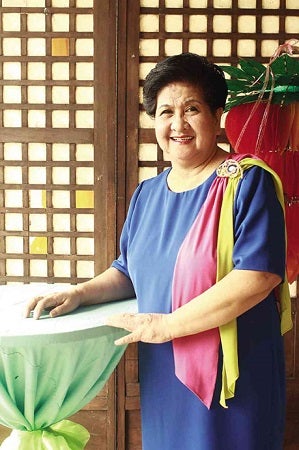 The recipes of all dishes featured in the book do not have chemical preservatives and additives, like monosodium glutamate. This is because the author wished that today’s generation of cooks to return to the use of basic ingredients, such as vinegar, soy sauce, salt and sugar.

“It is back to the basic style of cooking. Food is more heavenly in taste in its unadulterated form,” Valde said.

With a small group of researchers and a photographer, Valde visited every town in the province to search for more authentic cuisine. “The book should not only feature Lucban food but also other famous menus from other parts of the province,” she said.

Her friends also helped her gather book materials. “Some of them have literally dug into their family’s antique cabinets and drawers in search for the original recipes,” she said.

Officials of publishing houses were fascinated with some of the dishes, such as “unday-unday,” a popular Christmas delicacy made from grounded sticky rice, its powder kneaded like balls and cooked with coconut milk and caramelized sugar.

Another, hardinera, is made of diced pork sautéed in tomato sauce, garnished with bell pepper and slices of boiled eggs, and steamed in a “llanera.”

During fiestas, Lucban natives are fond of offering their dishes to house guests from other towns. Valde cited the town’s four popular dishes—

“Often times, guests are sure to have a taste of these four specialties in almost all houses, rich and poor,” she said.

One of her favorites is the “kinulob,” or big chunks of pork cooked in slow fire with vinegar and “dilaw na luya” or turmeric.

Valde attested that most families in Quezon still treated the recipes of their signature dishes as well-guarded treasures.

“All are more than willing and happy to cook for us to have a taste of their family treasure. But some begged us not to ask for the recipe for they won’t share it at all. And I understand them,” she said.

After the book launching, the author would leave for the United States to attend another invitational cooking tour and demonstration. “There are lots of Lucbanins and Quezonians in the US who are waiting for the book,” she said.

“I want lots of people to enjoy it. For me, the return of my investment is only secondary. This will be my legacy,” Valde said.