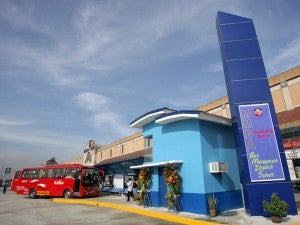 MANILA, Philippines — Despite mixed public reactions to a centralized bus terminal opening soon in Parañaque, the host local government considers it a boon and not a bane.

Parañaque mayor Edwin Olivarez, in a statement, expressed optimism that the Southwest Interim Transport Terminal (SITT) at the Uniwide Coastal Mall would spur commercial development around the area.

“The area around the Uniwide terminal has immense commercial potentials, and once it becomes the connector transport hub in southwestern Metro Manila, we expect it to attract transport and travel-related business,” the newly elected mayor said.

The SITT is the first of three centralized provincial bus terminals set to be constructed on the fringes of Metro Manila by the end of the year. The project was ordered by President Aquino in a bid to keep more than 7,000 provincial buses off inner city roads and thereby decongest traffic.

Starting Aug. 6, the SITT, under the Metropolitan Manila Development Authority (MMDA), will be the final destination in the metro for around 1,000 buses coming from Batangas and Cavite.

Last week, nonprofit group National Center for Commuter Safety and Protection Inc. expressed opposition to the project, citing it will increase the commuters’ travel time and costs, and inconvenience particularly with a number of heavy luggage.

The group, represented by president Elvira Medina, brandished a survey stating that 91 percent of 1,270 commuters were against the project.

But as far as the Parañaque city government is concerned: “[We] will make sure the terminal will be operated in an efficient and orderly manner, and we will extend all the necessary assistance and help to other government agencies, particularly the MMDA, to ensure the success of this new transport setup,” Olivarez said.