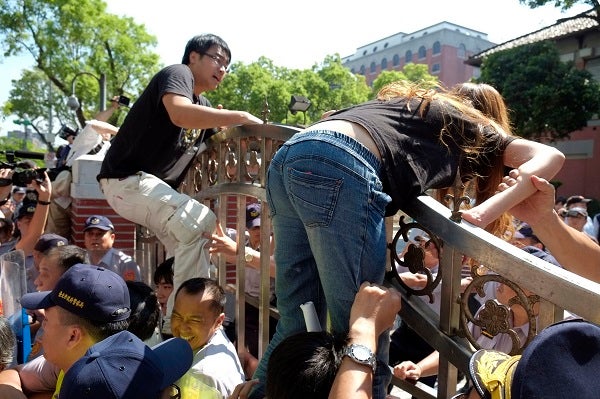 Student protesters scale the gates of the legislature in defiance of Taiwan’s latest trade pact agreement with China, in Taipei, Taiwan, Wednesday, July 31, 2013. The pact, signed between the sides on June 21, allows each to invest in the other’s service sectors, including banking. AP/Wally Santana

TAIPEI, Taiwan—Dozens of Taiwanese scuffled with police Wednesday in the rowdiest demonstration yet against a new trade agreement with China.

Signed on June 21, the pact allows each side to invest in the other’s service sectors, including banking. Its approval by Taiwan’s legislature is considered to be a foregone conclusion because President Ma Ying-jeou’s Nationalist Party enjoys a substantial majority in the 113-member body.

During the fracas outside the island’s legislature, some of the demonstrators breached a police line and climbed over the fence of the legislative building. They briefly protest inside the compound before being dispersed. No arrests were reported.

The pact is the latest in a series of China trade agreements promoted by Ma. The Taiwanese leader believes that unless Taiwan tightens its economic links with the mainland, the island’s standard of living will suffer, particularly as neighboring Asian countries pursue their own commercial preferential arrangements with Beijing.

The demonstrators reject this, insisting that the pact will increase Taiwan’s already considerable dependence on the mainland and enable China to dictate political conditions to the point where Taiwan’s hard-won democratic freedoms will eventually be imperiled.

Taiwan and the mainland split amid civil war in 1949. Beijing considers the island of 23 million people to be part of its territory and says it will bring it back into the fold, by persuasion if possible, by force if necessary.