Pope tells regional bishops not to act like ‘princes’ 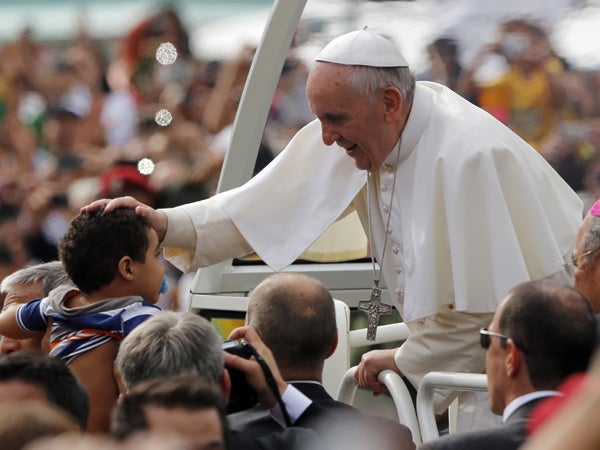 Pope Francis blesses a child as he rides on the popemobile to celebrate mass in Rio de Janeiro Sunday July 28, 2013. AP/Jorge Saenz

RIO DE JANEIRO – Pope Francis chided the Catholic hierarchy Sunday, telling regional bishops not to behave like authoritarian “princes” and urging them to move closer to the people.

“Bishops must be pastors, close to the people, men who love poverty, men who do not think and behave like princes,” the pontiff told Latin American and Caribbean bishops on the last day of his weeklong visit to Brazil.

“Bishops must lead, which is not the same as being authoritarian,” he added in a speech that also warned against “clericalism” under which the church projects an image of power and privilege while the laity’s role is simply to pray and obey.

“The phenomenon of clericalism explains, in great part, the lack of maturity and Christian freedom in a good part of the Latin American laity,” the Argentine-born Francis said.

The spread of bible study groups and pastoral councils were “helping to overcome clericalism and increase lay responsibility,” he added.

Since his installation in March, the first Latin American pope has sought to re-energize Catholics, using his Rio trip to urge young believers to spread the Gospel and “make a mess” in their dioceses.

On Saturday, he told thousands of bishops, priests and seminarians that “it is in the favelas… that we must go to seek and serve Christ.”

“We cannot keep ourselves shut up in parishes, in our communities, when so many people are waiting for the Gospel,” he added.