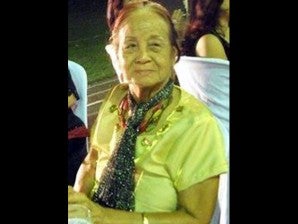 Doctors at the Silliman Medical Center, where Tiempo was rushed Sunday afternoon for myocardial infarction, pronounced her dead at 5:35 p.m. after trying to resuscitate her.

Dr. Tiempo died at a time when Silliman University was starting its 110th Founder’s Day celebration.

“But Dr. Tiempo will be part of our Founder’s Day celebration,” he added.

The National Commission on Culture and the Arts, in its website, says Tiempo, a poet, fictionist, teacher and literary critic, is regarded as one of the finest Filipino writers in English whose works are characterized by a remarkable fusion of style and substance, of craftsmanship and insight.

Together with her late husband, Edilberto K. Tiempo, she founded and directed the Silliman National Writers Workshop in Dumaguete City.

In the last 50 years, the Workshop has produced some of the country’s best writers, who have come to fondly call her “Mommy Edith.”

She was conferred National Artist for Literature in 1999.