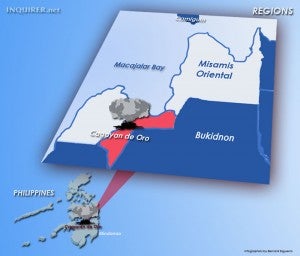 CAGAYAN DE ORO CITY—His angry wife kept calling him to come home, so he left the restaurant where he was dining with friends, among them was Provincial Board Member Roldan Lagbas. When he got home, he heard the explosion. He rushed back to learn Lagbas was killed.

Police are reviewing tapes from security cameras at two nightclubs here in search of a man who planted the bomb that exploded and killed six people and injured 48 others in a restaurant filled with doctors and other health workers after a national medical convention late Friday.

But the recovery of evidence may now be impossible, as owners of businesses at the site cleaned up the place Saturday morning, riling Interior Secretary Mar Roxas who arrived for an inspection in the afternoon.

“This is a crime scene. [Never can you see] a crime scene being released less than 24 hours after the crime?” Roxas told police and local officials.

“On whose orders was this place cleaned?” he demanded.

Getting no answer, Roxas ordered the police to find out who was responsible for the lapse in procedures.

Police said an improvised explosive device went off at around 11:30 p.m. at a restaurant in the popular Rosario Arcade just outside Lim Ket Kai Mall here.

The powerful explosion shattered glass windows and upturned tables and chairs at nearby establishments and damaged motor vehicles parked up to 30 meters away from the arcade.

Police said the explosion was so loud it was heard by people 4 kilometers away.

Forty-eight injured people were taken to area hospitals for treatment.

Senior Supt. Graciano Mijares, city police chief, said most of the victims were doctors and pharmaceutical sales representatives who had just attended a national convention of lung-disease specialists at a nearby hotel.

Malacañang denounced the attack on the medical convention.

“We deplore this act of violence at this meeting of professionals, the Philippine College of Physicians, whose mission in life is to bring about healing,” Communications Secretary Herminio Coloma said.

Rodriguez said investigators had generated a composite sketch of a possible suspect based on the accounts of witnesses.

Rodriguez said the investigators would compare the sketch with images recorded by security cameras at the two nightclubs nearest to Kyla’s Bistro, where the bomb went off as doctors, other health workers and pharmaceutical representatives from across the Philippines were celebrating after a national convention.

Rodriguez said investigators were looking for a man who put down a backpack on a chair and left  shortly before the blast.

It was not clear whether the chair was inside the restaurant or in the corridor where the two nightclubs were located.

Rodriguez said crime scene investigators found a 9-volt battery at the site, indicating that the explosive device was a time bomb.

The Philippine Medical Association (PMA) condemned the attack on the convention of doctors and health workers.

“We condemn to the highest degree this dastardly act of violence against our people. A colleague, Dr. Erwin Malinay from Metro Manila, was killed and many other allied health workers were seriously injured in the blast,” PMA president Leo Olarte said in a statement.

Olarte said more than a thousand doctors from all over the country who belonged to the Philippine College of Chest Physicians and the Philippine Society of Allergy, Asthma and Immunology, both specialty societies of the PMA, were in Cagayan de Oro City for conventions.

Members of the Philippine Dental Association also had a convention in the city during the time of the bombing, he said.

“Our colleagues from the World Medical Association are asking us if it is still safe to send their members to the Philippines,” Olarte said.

Olarte urged Roxas to help provide security for members of PMA and the health workers who were still in Cagayan de Oro.

“This has no place in a peaceful community like ours,” Moreno said.

Misamis Vice Gov. Joey Pelaez said the motive of the attackers was difficult to understand, but dismissed suspicions that provincial board member Lagbas was the target.

“Lagbas had no known enemies,” Pelaez said. “[H]e came from a known political clan, but he was a [junior] politician,” he added.

Local businessman Noel Arcenas, who owns an electronics shop at Rosario Arcade, said at least 100 people were in the restaurant when the explosion occurred.

“I felt then heard the blast,” Arcenas said, adding that he was standing about 15 meters away.

“I looked around and saw this ball of white smoke. People were running away bloodied and survivors were dragging at least seven or eight people away from the blast site,” Arcenas said.

A friend of Lagbas who wanted to be identified only as Don said he survived the blast because his angry wife called him home.

He said he was dining with Lagbas and several other friends in the restaurant but he left early because his wife kept calling, asking him to come home.

“I just got home when I heard the explosion,” Don said.

He said he rushed back to the arcade where he was met by Lagbas’ relatives who told him  his friend was among those killed.

“This is my second life now,” he said. “If not for that phone call, I would have been one of the dead.”

Authorities declined to speculate on the motive for the bombing, as the investigation was under way.

The two sides are negotiating a final peace agreement, which they expect to sign by yearend. With reports from Philip C. Tubeza in Manila and from AFP