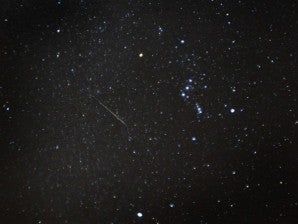 MANILA, Philippines—Beginning Sunday and until the last day of July, early risers may get to witness a “nice display of meteors on moonless mornings,” according to the astronomical division of the state weather bureau.

The Southern Delta Aquarids meteor shower will be best observed across Philippine skies from July 28 to 31, with the spectacle expected to peak before midnight and onward on July 30, the Philippine Atmospheric, Geophysical and Astronomical Services Administration (Pagasa) said.

In its monthly astronomical diary, Pagasa said stargazers would, under favorable conditions, be able to see five to 10 meteors an hour during the shower.

“The stream normally produces about 5-10 meteors/hour with overall activity of about 15 meteors/hour under good sky conditions,” the astronomical diary issued by Pagasa officer-in-charge Vicente Malano said.

The Southern Delta Aquarids are part of a complex of radiants – or the points in the sky where the meteors come from – in the constellations Aquarius, Capricornus and Piscis Austrinus.

“All of [these] combine with sporadic and early Perseid activity to provide a nice display of meteors on moonless mornings in late July,” Pagasa said.

NASA also provided tips on the best way to view the meteor shower. “Find an area well away from city or street lights. Come prepared with a sleeping bag, blanket or lawn chair. Lie flat on your back and look up, taking in as much of the sky as possible,” it said.

“Your greatest chance for seeing meteors is to be looking about halfway between the horizon and the zenith, and if you know the constellation, 45 degrees from it,” NASA added. “In less than 30 minutes in the dark, your eyes will adapt and you will begin to see meteors. Be patient – the show will last until dawn, so you have plenty of time to catch a glimpse.”

Meteors or “shooting stars” are the visible streaks of light coming from leftover particles of comets or asteroids that burn up as they enter Earth’s atmosphere.

“When comets come around the sun, the dust they emit gradually spreads into a dusty trail around their orbits. Every year the Earth passes through these debris trails, which allows the bits to enter our atmosphere where they disintegrate to create fiery and colorful streaks in the sky,” NASA said.

Besides the meteor shower, Pagasa said another visual treat is available to stargazers throughout July.

“Stargazers will be having a nice time watching the night sky with the famous Summer Triangle of the stars Vega, Deneb and Altair of the constellations Lyra, Aquila and Cygnus, respectively, being well placed in the eastern horizon before midnight,” it said.