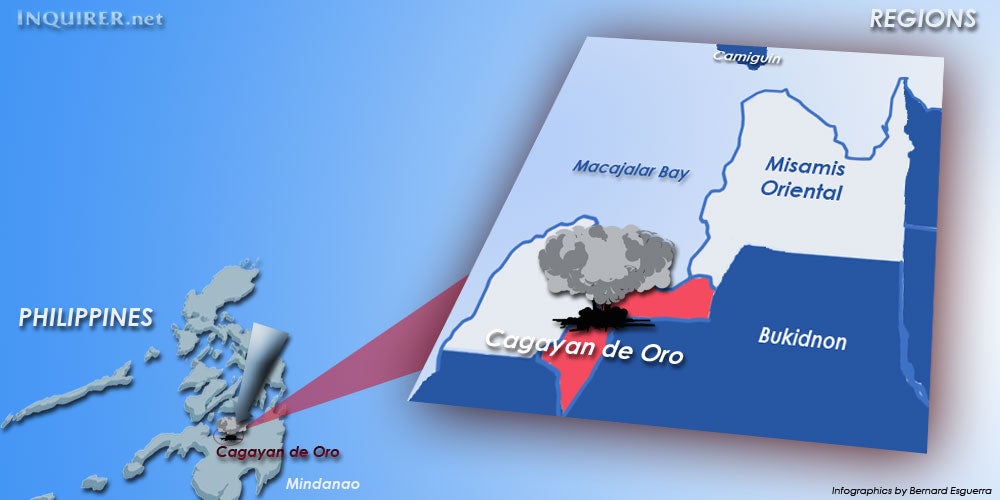 CAGAYAN DE ORO CITY — An explosion from a suspected improvised explosive device (IED) killed six and injured at least 28 others in an upscale watering hole at about 11:30 p.m. Friday.

The dead from the blast at the Lim Ket Kai complex included an incumbent board member of Misamis Oriental, a doctor, and sales representatives of medical companies.

Misamis Oriental board member Roldan Lagbas, a scion of a political clan in the province,  died after being brought to the Cagayan de Oro Medical Center.

The two others who also died after being brought to another hospital were identified as Dr. Erwin Malanay and Antonio C. Paredes, a pharmaceutical sales representative.

Cagayan de Oro City Police Director Graciano Mijares, in an interview at the site of the blast, said PNP regional director PC Superintendent Catalino Bagaslao Rodriguez Jr. has ordered the formation of a special investigation task group composed of units of both the regional and city police to look into the incident.

The explosion, which broke glass panes, upturned tables and chairs, and damaged cars parked about 30 meters away, was heard as far as the national road, about 4 kilometers away.

Police investigators are looking into the possibility that CCTV cameras at Kyla’s Bistro and Candy’s, adjoining restaurants at the Lim Ket Kai complex may shed light on the identities of the suspects.

Mijares, however, declined to say what type of explosive may have been used.

“We will have to wait for the results of the investigation of our post blast investigators,” Mijares said.

Businessman Noel Arcenas, who rents out a sound system for the party venue and who  survived the blast, said there were at least 100 people at the popular restaurant row when the explosion occurred.

The row of restaurants is usually transformed into a large party venue with a live band playing during Friday and Saturday nights with patrons spilling into the parking areas fronting the restaurants.

“I felt then heard the blast,” Arcenas, who was about 15 meters away from the epicentre of the blast, said.

“I looked around and saw this ball of white smoke,” Arcenas said.

“People were running away bloodied and survivors were dragging at least seven or eight people away from the blast site,” Arcenas said.

Some 800 doctors who are Lung Specialists (Pulmonologists) and other allied health professionals from all over the country are also in the city for the Philippine College of Chest Physicians (PCCP) 16th Midyear National Convention at the Grand Caprice, Limketkai Center.

“That is probably the reason why there were a lot of doctors and medical sales representatives at the party venue,” Cagayan de Oro City vice mayor Ian Acenas said.

“I call on the City government to thoroughly look into this matter as this has an adverse impact on the peace and order situation of the city,” Acenas said.

Misamis Oriental vice governor Joey Pelaez, a colleague of Lagbas, said he was skeptical that the blast may have targeted the first term board member.

“Roldan Lagbas has no known enemies,” Pelaez said, “he is a neophyte politician despite coming from a known political clan.”

“It is difficult to understand what may have motivated the suspects to undertake this terror act,” Pelaez said.

Read Next
A look at the Stations of the Cross
EDITORS' PICK
China expands lockdown against virus, fast-tracks hospital
SM continues to send relief assistance to remote towns in Batangas
‘A greener, cleaner tomorrow’: A how-to guide for Filipinos who want to help with today’s energy crisis
Palace: US Senate move also made Duterte junk VFA
Get exciting deals and discounts when you download the new McDonald’s App
Countries with confirmed cases of coronavirus
MOST READ
Taal’s sulfur dioxide emission increases
No time for revelry; Tagaytay instead plans for alert level 5
Palace: US Senate move also made Duterte junk VFA
Dina Bonnevie on Coney Reyes: We have forgiven each other
Don't miss out on the latest news and information.