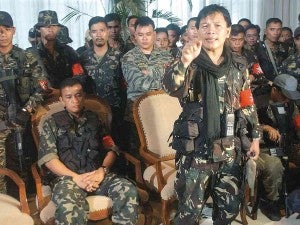 Ten years after the Oakwood mutiny, the military continues to regard the caper by more than 300 junior officers and enlisted men as a “wrong” but “necessary event” that led to reforms in the Armed Forces of the Philippines.

“Definitely, we don’t agree with the method because that was [committing] violence against our own organization, but in a way it became an eye-opener. If our officers are doing this, it means that there is something wrong so let’s do something [about it],” said AFP spokesperson Lt. Col. Ramon Zagala.

Zagala described the mutiny as “wrong,” but ironically it “became the necessary event” that led to reforms in the military.

“I would have to say that Oakwood became a catalyst for reforms. Things changed after Oakwood, for the better,” he added.

Zagala said “changes in the AFP were being implemented even before the Oakwood mutiny, but Oakwood hastened the implementation of those reforms.”

The Oakwood mutiny was carried out on July 27, 2003, in the heart of Makati Central Business District, and was generally seen as a cry against corruption in the military leadership during the Arroyo administration.

But the Feliciano Commission, formed shortly after to investigate the mutiny, described it as a “well-planned” power grab, and not a spontaneous protest, in its October 2003 report.

15-member council, but that the plot was discovered, leading to an arrest order by then President Arroyo on the evening of July 26.

The commission however conceded that some of the soldiers’ grievances were legitimate, and that they were rooted in corruption in the AFP. The report also underscored the need for modernization in the military establishment.

Led by now Sen. Antonio Trillanes IV, the Oakwood mutineers, who called themselves the Magdalo group,  sought amnesty from President  Aquino in 2011, and got it two weeks before the Makati Regional Trial Court was to hand down its verdict on the case.

Citing prudence, then trial court Judge Oscar Pimentel did not promulgate his decision since the amnesty order was in Congress and appeared headed to an overwhelming approval by President Aquino’s allies.

Trillanes and the other Oakwood mutineers were finally free after seven years in detention under the Arroyo administration. In a twist of fate, it was now former President Arroyo who remains on house arrest on allegations of corruption.

The Pampanga representative has been unable to attend sessions at the House of Representatives, while Trillanes is now serving his second term in the Senate.

Whatever motive was behind the Oakwood mutiny, the defense establishment responded by issuing policy reforms meant to solve the corruption issue.

Zagala said he believed the reforms began after then defense secretary, the late Angelo Reyes, was relieved from his post, with President Arroyo taking over his post temporarily before the appointment of top lawyer Avelino Cruz.

The PDR, Defense System of Management and the Security Sector Reform (SSR) have become buzzwords in the defense and military establishments.

Under the SSR, whose cornerstone includes justice and human rights, stakeholders are consulted by the AFP on ways that it can improve itself as an institution.

Zagala said that starting in 2006, funds were farmed out to individual AFP units instead of being centrally managed.  Under this new system, officers are taught fiscal management and accountability, and are compelled to be strategic as well in planning their operations.

The military also established a grievance system that allows officers and their men to raise complaints against their superiors or contemporaries.

This resulted in the Inspector General actually wielding enough power to investigate [anomalies] and make recommendations to the AFP chief of staff,  Zagala said.

“We want to know what else we can do to make the changes possible. It’s very hard to accept that you need to look into the organization, find something wrong and change. [But] in the AFP, it is our way to improve,” he added.

Zagala said the military’s Internal Peace and Security Plan  Bayanihan aimed to change the values of soldiers and not just improve their fighting capabilities.

“[The plan] includes a moral standpoint, such as avoiding human rights violations. We are saying to the soldiers, this is the new armed forces, this is how you should act,” the AFP spokesperson added.

Zagala said there was no guarantee that “there would be no complaints or grievances” against the military by its own soldiers in this new era in the AFP.

“By nature, we are not a perfect organization.  There will be problems that would spring up and need to be addressed … We cannot say [that] after Oakwood, no one would complain anymore,” Zagala said.