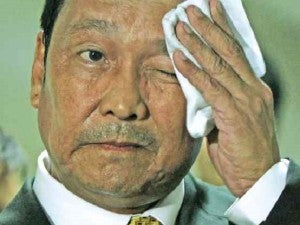 ON THE HOT SEAT Senator Lapid: It’s the job of COA to look into how the municipalities spent the money. INQUIRER FILE PHOTO

It was P20 million worth of garbage deodorizer, not antidengue solutions, that supposedly went to three towns in Rizal and one town in Quezon, in projects funded by the pork barrel of Sen. Manuel “Lito” Lapid.

The “pest control” company that supplied the chemical mixture for an antidengue program no longer operated from a given address here even before it had entered into contracts with the four local governments, each getting P5 million from Lapid’s pork barrel, formally called Priority Development Assistance Fund (PDAF), records obtained by the Inquirer showed.

Innsbruck International Trading last paid its business permit in Rodriguez in 2011, but documents showed that it was still able to secure a distribution contract in another town using a business permit supposedly issued by this municipality in 2012.

Even the head of the Rodriguez business permit and licensing office (BPLO) was surprised when told that Innsbruck was no longer existing. The Inquirer checked out the company’s given address at Sitio Maislap in Barangay San Isidro here.

The company, according to residents and a former employee, ceased operating in 2010. But it still managed to secure a business permit in 2011 using the old address.

Andrea Linco, the BPLO chief, conceded that her office had failed to check the records in its database.

It was also in 2011 that the company was awarded the contract to supply P20 million worth of “Effective Microwealth Probiotics,” a microbial innoculant mainly used for deodorizing garbage trucks or animal farms, using the PDAF of Lapid.

Upon Lapid’s request, the Department of Budget and Management issued the Special Allotment Release Order on Dec. 13, 2011, for P20 million as “subsidy” or “financial assistance for the purchase of medicines for [dengue].” The municipalities of Polillo in Quezon and Teresa, Pililia, and Baras in Rizal each received P5 million from the PDAF allocation.

A check with the Rodriguez BPLO on Wednesday showed Innsbruck in its database although the last time the company paid the annual business tax was on Jan. 24, 2011, for P14,132. It has incurred a running balance of P238,673.46 due to penalties when it stopped renewing the license in 2012.

The company applied for a permit to operate a “pest control” business here on Aug. 25, 2005.

According to documents supplied by Polillo officials, Innsbruck was able to transact business with them in January 2012 by submitting a supposed 2012 business permit issued by the Rodriguez BPLO. The permit is required of companies joining biddings for a government project.

“They could have not possibly been issued a permit (in 2012) because they did not pay that year. Our system does not allow printing of business permits unless the balance is paid,” said Cherwin Evangelista, a staff member at the BPLO who walked the Inquirer through the database system.

Shown a copy of Innsbruck’s supposed 2012 business permit, Evangelista immediately noticed a discrepancy: the BPLO since 2012 has been using a different header and puts a watermark logo on the permit, but the document the company provided did not have one and used the old layout.

What shocked the BPLO, “except for the date issued, everything, including the amount (billed to the company) and the OR (official receipt) number, was the same with the 2011 permit,” Evangelista said.

“This could have been tampered with,” Linco said.

‘Scaffolding’ for an office

“The company shut down when the (Rodriguez) dump was also closed and (the local government) shifted to a landfill in 2010,” said the former employee, who gladly showed his uniform, an avocado-green long-sleeved shirt with the company’s name.

He said he used to spray garbage trucks with the EMP solution to remove the foul odor. EMP, he said, was effective in removing the foul odor. “Spray it on feces and the smell would be gone fast.”

When asked if it was also effective against dengue: “Dengue? No! It’s just for the garbage,” said the former employee, who requested that his name be withheld, as he did not want to get involved in any irregularity   with Innsbruck.

EMP is all “organic” and did not contain any chemical, he said. In fact, he said, they made the solution themselves using mashed papaya, “pulot” (molasses), coconut juice, brown sugar and water.

“We only used a blender,” he said.

He said the production cost might have been “cheap.  I’m not sure how they could sell it for millions of pesos.”

“We only put up a scaffolding and sprayed the trucks from there,” he said.

There were no traces of the company at the Rodriguez address it provided, except for the black plastic containers that each contained 20 liters of EMP.

The place is now an empty lot in front of a junk shop. The residents are now using the EMP containers, which the company gave away when it shut down, to store water for their household needs.

The former employee did confirm the identity of the company’s general manager, Ma. Victoria Tolentino, as shown in government records.

Read Next
Lapid: There’s nothing irregular
EDITORS' PICK
Being a celebrity isn’t wholly an ‘advantage’ in the election, says Sotto
Acer starts the year off strong with the Aspire Vero National Geographic Edition
Octogenarian jailed for ‘stealing mangoes’ freed after people chip in for bail
Gov’t eyeing COVID-19 tests in pharmacies
Gear up and get ready to play with Yamaha Mio Gear
Over 3 Million worth of prizes to be won at Smart Padala’s SENDali Manalo Promo!
MOST READ
Natural immunity more potent than vaccines during US Delta wave—study
Mocha Uson, Michele Gumabao draw flak for running under party-list representing mothers
Bongbong Marcos-Sara Duterte tandem adds Zubiri, Gadon, Marcoleta to Senate slate
Help pours in for octogenarian jailed for ‘stealing’ mangoes in Pangasinan
Don't miss out on the latest news and information.