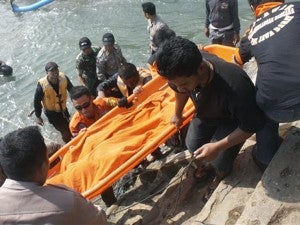 Rescuers carry the body of a victim killed after a boat carrying asylum seekers sank off Java island, in Cianjur, West Java, Indonesia, Wednesday, July 24, 2013. Rescuers were searching Wednesday for dozens of asylum seekers still believed missing after their boat sank in Indonesian waters on the way to Australia. More than 150 survivors were brought to safety and three bodies were recovered. AP FILE PHOTO

JAKARTA, Indonesia— The death toll from an overcrowded asylum seeker boat carrying more than 200 people that sank off Indonesia’s coast has climbed to 15 after four more bodies were recovered, a rescuer said Friday.

The women’s bodies were located late Thursday and early Friday near Ujung Genteng beach, about 50 kilometers (31 miles) west of where the overcrowded tugboat sank Tuesday off the coast of West Java, said Rochmali, a rescue official from the local search and rescue agency.

The exact number of people missing remains unclear because there was no manifest, but the boat was believed to be carrying about 204 people, of which 189 survived. Most were from Iran, Iraq and Sri Lanka, and bound for Australia. Search operations were set to stretch into Saturday.

Rochmali, who was searching for survivors by helicopter, said they have widened the search area following the current to the west up to 60 kilometers (37 miles), but there was no sign of any survivors Friday morning.

“The area was declared clean,” said Rochmali, who like many Indonesians uses a single name. “But we can still hope until tomorrow.”

The vast islands that make up Indonesia and its proximity to Australia’s Christmas Island make it a popular exit point for the perilous journey. Hundreds of asylum seekers from war-torn countries have died in recent years trying to make the trip on rickety fishing boats.

Last week, Prime Minister Kevin Rudd changed Australia’s refugee policy so that migrants who arrive by boat will no longer be allowed to settle in the country. Instead, they will be taken to the island nation of Papua New Guinea to be considered for resettlement there.