The pope and the Stones, superstars of Copacabana | Inquirer News
Close
menu
search

The pope and the Stones, superstars of Copacabana 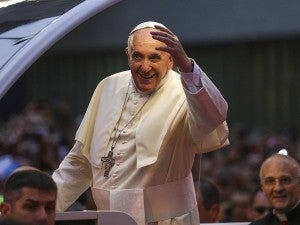 RIO DE JANEIRO–Pope Francis on Thursday showed that his message of renewed faith in Jesus Christ can compete with the Rolling Stones and their Sympathy for the Devil.

Apart from New Year’s fireworks that attract countless revelers to the crescent moon-shaped beach every year, nobody had brought so many people to Copacabana until Mick Jagger and Keith Richards came to town.

On February 18, 2006, the British superstars who sold millions of records drew the biggest crowd of their storied career.

Various estimates say between one million and 1.7 million people flooded the beach to see the bad boys of rock n’ roll for their “Bigger Band” tour.

But 76-year-old Pope Francis showed that he commands just as much star power as Sir Mick, who turns 70 on Friday.

Crowds shrieked and chanted the pope’s name as his jeep with open sides and a glass top took him to a giant white stage on the beach.

The pope, with his resplendent white robe, stood on a giant white stage with a towering cross illuminated by a blue light.

Large screens and speakers beamed his ceremony to people standing at the other end of the beach.

Apart from the large stages and endless crowds, the comparison ends there.

The pope stood soberly on a podium while Jagger and the Stones danced the night away.

And the pontiff is staying in a quiet hillside residence, while “Their Satanic Majesties” spent their nights in the beachfront Copacabana Palace hotel.