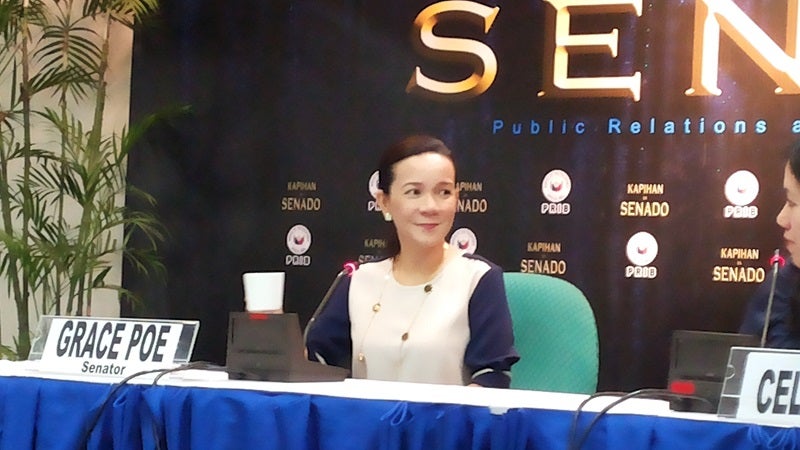 MANILA, Philippines – Senator Grace Poe, who topped the May 13 senatorial election, is open to run in the 2016 presidential derby though she said she has yet to prove her mettle in the Senate.

“Para ambisyunin ko yung 2016? I guess normal lang yun (I guess it’s just normal to aspire for 2016) when you’re within the top five you are considered as a possible (contender). I won’t have …false humility,” Poe said at the regular weekly forum at the Senate Thursday.

“But really my concern right now is also my fear. Being number one, people just tend to scrutinize what you’re doing and I’m doing this as I said to give honor to my dad and I feel    that I can do that even in the Senate,”  she said, referring to the late  Fernando Poe Jr.

Poe said no one has approached her yet or she has not approached anybody to discuss about the 2016 presidential elections.

“Iniisip ko bang kakayanin ko yan? Hindi ko alam kung kayayanin ko. Sa tingin ko hindi ’yan kakayanin sa ngayon dahil ang hirap hirap (Do I think I can do it? I don’t know if I can. I think I can’t do it now because it’s so difficult).”

“Pero huwag n’yo rin naman akong pagsalitain nang tapos… Parang tinanggal nyo rin sa akin yung pagkakataon (But don’t make me say something final…because you’re removing my) freedom to express myself because in the future I might have a different mindset. But for now I’m telling you, I don’t feel I’m yet qualified until I have proven myself in the Senate,” the neophyte senator added.

For now, Poe said her priority is finishing her six-year term in the Senate.

Grace Poe spent P6.07 for each vote she got

Escudero hesitant about running along with Poe in 2016