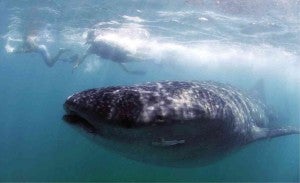 Rising sea temperature due to climate change, stress and lack of food are keeping the butanding far from the coastal waters of this town, a Butanding Interaction Officer (BIO) said.

Alan Amanse, chair of the BIO Board in Donsol, on Saturday said rising sea temperature, stress and insufficient planktons (food) are driving the whale sharks to cooler areas and linger in the deep sea or look for areas where food is abundant.

He said sightings of butanding in Donsol have dropped from eight last year to only two in the first half of this year, endangering the tourism industry of the town.

There are currently only two whale sharks swimming off Donsol waters. These are “Curly,” which has a curly dorsal fin, and “Lucky,” which has a nylon cord tied to its tail.

“The bigger ones measuring 14 meters long are nowhere in sight,” said Amanse.

He said gone are the likes of the famous “Putol,” which has no caudal or tail fin, and “Nognog,” so named because of its dark color.

Amanse said the butanding are also suffering from stress because of the many interaction events conducted by the BIO during the butanding season from December to May.

He said there are at least 40 boats with six tourists each on board interacting with whale sharks in every event.

Town councilor Rey Aquino said the rampant gathering of planktons by fishermen and the presence of E. coli contamination in the Donsol River due to the presence of household toilets along riverbanks further contributed to the scarcity of food in the feeding grounds of the butanding.

Amanse said the tourism industry of the town is hurting, losing millions of pesos in revenue.

She said revenue collection for the past six months of this year reached only P2 million. De la Cruz, however, said she hoped revenues this year will match last year’s.

Another environment issue confronting Donsol is the cutting of mangrove trees in Barangay Ogod by residents who use these as a parking area for boats.

Aside from being tagged as the butanding capital of the country, Donsol has other tourist attractions like the “Firefly Watch” in Ogod River and an 800-square-kilometer fish sanctuary near the coastal villages of Sibago, Tinanogan and San Rafael.

Donsol town is a third class town in Sorsogon with a population of over 47,000.